When an encyclopedic museum presents a new selection of works from its permanent collection, there are so many options that each selection matters. Such is the case with “To Be Determined” by the Dallas Museum of Art, which examines “Hope and Resilience” through several dozen works of art in six interconnected galleries.

In the tense and conflicted year 2020, “To Be Determined” offers viewers the opportunity to include both historical and contemporary works of art in their own interpretations of the present moment and the present, instead of asking viewers to unite around a single, specific narrative the immediate future.

Instead of telling a story of successive periods, styles, or movements, each gallery on the show is defined by suggestive but indefinite clusters of words – for example, “Tension Balance Solidity” and “Endure Dream Awaken” – that attempt to capture and organize those powerful but inconspicuous feelings that this busy year evoked.

The juxtaposition of Lorna Simpson’s work “Blue Turned Temporal” (left) from 2019 with Frederic Edwin Church’s beloved painting “The Icebergs” from 1861 is one of the improbable connections in the exhibition “To Be Determined” at the Dallas Museum of Art Despite all the differences in style and historical context, the relentless power of nature is expressed in both works.(John Smith / Dallas Art Museum)

36-year-old Holmes comes from the small town of Thibodaux in the US state of La. He now lives in Dallas and is enjoying increasing recognition in the art world. He paints warm, intimate scenes of the black community and family life with strong color contrasts and strong colors. graphic composition schemes. Tired and Four Brown Chairs (both 2020) depict people at home resting on the sofa or enjoying a game of cards while the colors around them seem to come to life.

There is something for everyone in the rest of the exhibition, as long as you put yourself in the spirit of things and don’t try to force each piece into a single narrative. I enjoyed pairing Lorna Simpsons Blue Turned Temporal (2019) with Frederic Edwin Church’s beloved The Icebergs (1861). Despite all the differences in style and historical context, the relentless power of nature is expressed in both works – a reminder of the smallness and weakness of humans, measured by that.

In a more aggressive way, the contemporary text-centric works in the gallery “Language Belonging Meaning” by Glenn Ligon, Mel Bochner and Adam Pendleton reflect today’s bitter arguments about word usage and remind us that the meaning of “America” ​​is for example is very much a source of conflict.

My favorite work on the show is Charles White’s 1961 study for a mural on the Baccus Medical Building in Dallas. In a harmonious arrangement of four black American figures, white combines the solid dignity of the early Renaissance with the simplified geometry of Precisionism. A beautiful drawing that gives due credit to the medical professions. 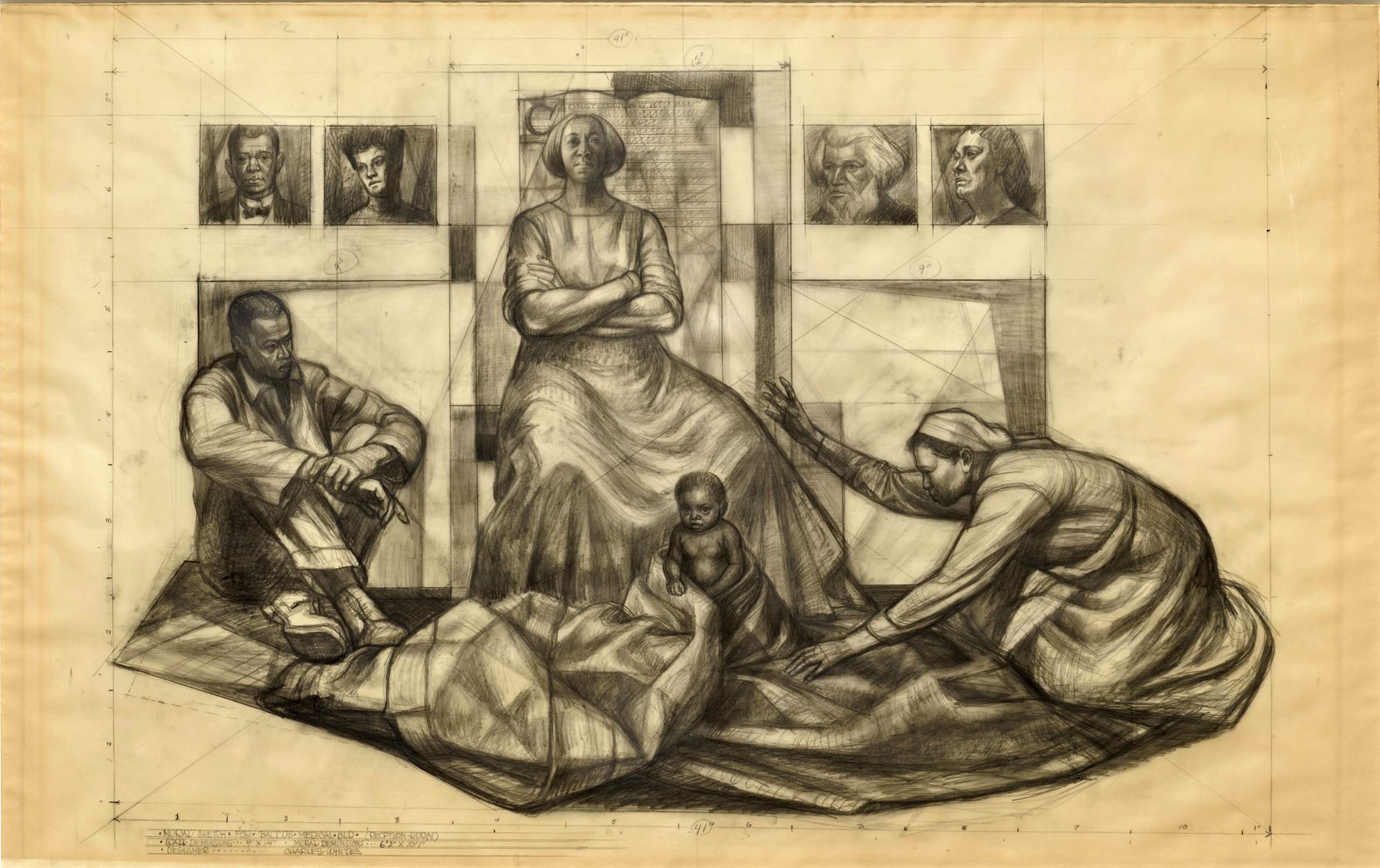 Charles White’s 1961 study for a mural on the Baccus Medical Building in Dallas combines the solid dignity of the early Renaissance with the simplified geometry of Precisionism.(Chad Redmon / The Charles White Archives)

Barely a second is Fannie B. Shaw’s appliquéd cotton blanket from the time of the Depression, named by President Herbert Hoover’s overly optimistic slogan “Prosperity is just around the corner”. In each of the squares, a figure identified by trade and clothing (cook, carpenter, poultry dealer, etc.) looks in vain around a (literal) corner and hopes for better times.

Shaw (1894-1991) is self-taught and works in the small town of Van Alstyne. She has a wit and a clout in her work that translates instantly to the era of graphic novels and internet memes. And for far too many Americans, wealth is still around the corner. 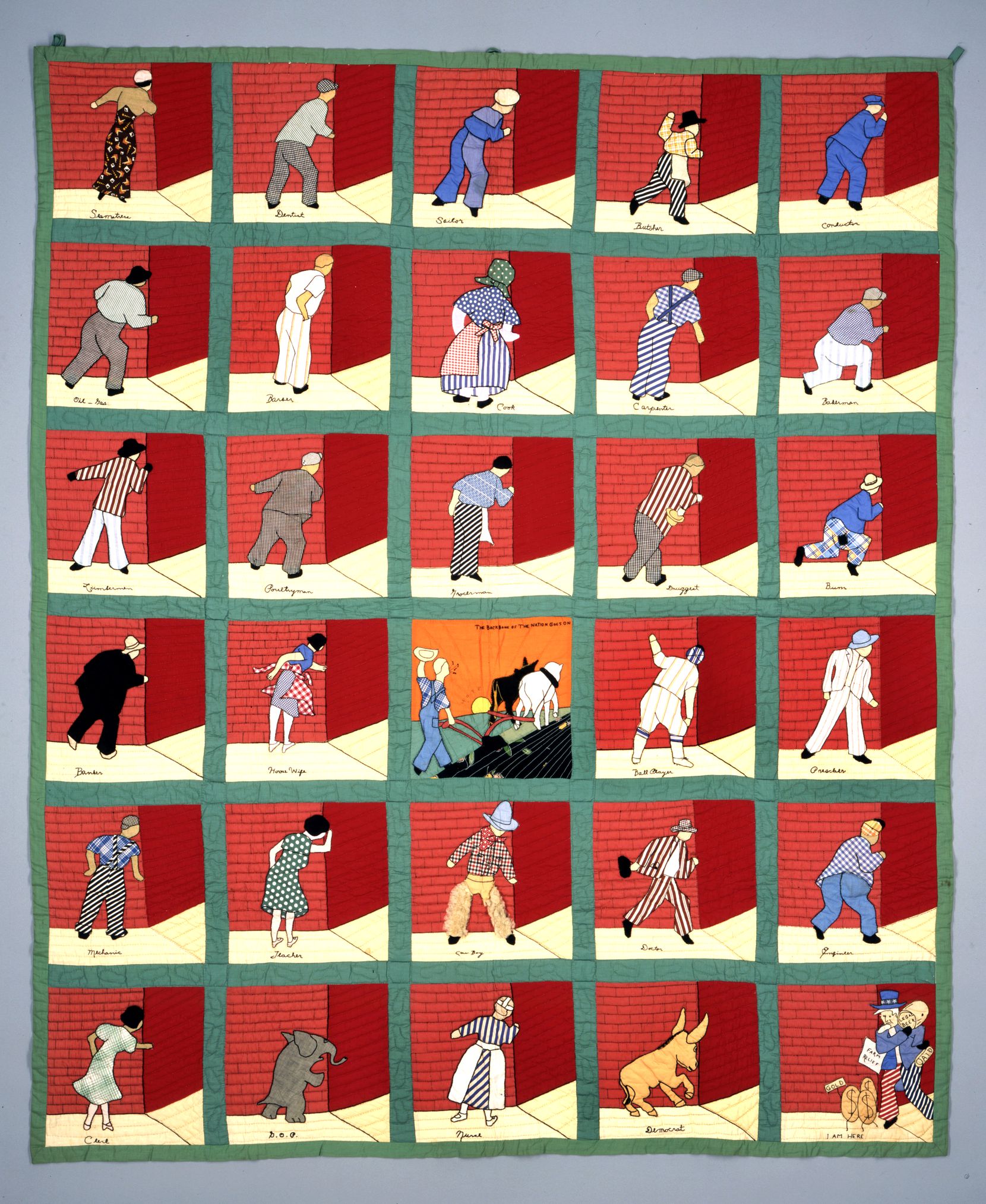 In the current pandemic, the DMA team, led by interim chief curator Sarah Schleuning, staged this show remotely and met with Zoom – a challenge that was impressively mastered. And for all the difficulties too obvious and numerous to mention, one leaves “With Resolve” with renewed hope and resolve.

I hope that one day our current conflicts will be resolved over a new unity that is reflected in art history. In order to coexist as a nation, people must share a common history at some level, and the nature of that history cannot remain open and indefinite indefinitely.

Visit the Dallas Museum of Art’s To Be Determined microsite for the virtual experience of the show after it’s complete. 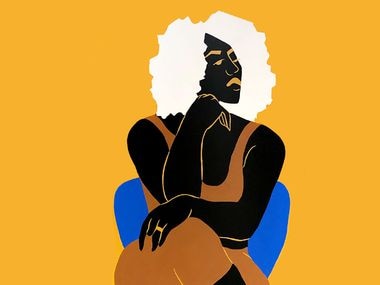