The Future of Sustainable Food Packaging Is in Dallas

A frosty glass of water had a time bomb on the rim: a paper straw. At first it did its job, but it only took a few sips for it to wither and dissolve. And Sharina Perry didn’t have that.

The former internet and cable manager started a wellness company in 2018 using plants like hemp for topical and oral applications. Now she was here at a pub in Oklahoma, thinking about how her knowledge of plants could help her create a new straw that won’t melt in liquid but still reduce waste.

Perry invented a tough, plant-based resin, an alternative to plastic that literally could hold its own. Two years after the paper straw dissolved in their jar, Dallas-based company PlantSwitch, in partnership with Perry’s Utopia Plastix, is using their invention to distribute a range of compostable food packaging to restaurants in North Texas and beyond. It can very well change the field of compostable goods.

Dillon Baxter and Maxime Blandin, two Southern Methodist University graduates and former golf teammates, have traveled to golf courses around the world. They also noticed the trend of paper straws in their beverages. And like Perry, they hated it.

“Of course we were glad they didn’t use plastic,” says Baxter, but they wondered why there was nothing better than a thin paper straw. Like countless self-starters before them, they decided to find something better. Last January, they founded PlantSwitch to replace single-use plastics in the service industry, and partnered with Perry and their compostable innovation.

When Baxter and Blandin were originally looking for a superior product, a manufacturer in Mexico tried to pass Perry’s idea on to themselves. When she read an article about PlantSwitch, she had an inkling: “When I saw it, I realized wherever she got her product, my material.” She reached out her hand to the guys. “I told them who I was and how wide our patent was,” she says. Perry stated that these Mexico samples must have used their science. (Yes, she informed her patent attorneys about the manufacturer.)

“She’s the inventor of the resin, she’s the brain behind it,” says Baxter. “What she came up with is pretty revolutionary and we think it has the ability to replace plastic in general.”

Dillon Baxter (left) and Maxime Blandin from PlantSwitch with Sharina Perry (center) from Utopia Plastix, inventor of a plant-based resin.

Now, Baxter and Blandin are taking Perry’s technology and distributing straws and utensils – soon bags and mugs – to over 150 customers. Early adopters include the Dallas-based Vandelay Hospitality Group; Restaurateurs Julian Barsotti from Fachini, Carbone’s, Sprezza and Nonna; Brady Wood of Park House and José; Shannon Wynnes restaurants such as Rodeo Goat and The Meddlesome Moth; the new Thompson Hotel in downtown Dallas; and many others both locally and nationwide. External customers include Pebble Beach Golf Resort in California; The guys got their wish to use the product in a large golf club.

“The plan is to scale up pretty quickly to eventually serve some of the largest chains in the country,” says Baxter.

Blandin, a native of the island of Martinique in the French Caribbean, has long been concerned about plastics after seeing the damage small island nations can do. Hailing from the proven inland town of New Braunfels in the Hill Country, Baxter didn’t have to observe any plastic pollution on an island to know what damage it is causing to the environment.

ACCEPTANCE AND DELIVERY HAS BEEN SKYROCKETED The pandemic started. Over the past year, several food delivery apps have doubled their business. Alcohol delivery app Drzly saw sales grow 300 percent. The search for “take-out” on the website has increased tenfold. And that’s just tracked data. Many independent restaurants order independently online, while others stick to the call and pickup method. Carryout dining has helped legions of restaurants survive these times. Still, that’s a lot of rubbish.

Plastic pollution is expected to increase by 40 percent over the next decade, according to a report from the World Wildlife Fund. That makes achieving zero waste goals much more difficult. Compostable kitchen and garden waste makes up about 30 percent of the waste at the city’s landfill. Single-use plastics are included in the city’s new comprehensive climate protection plan. In an effort to redirect 35 percent and 45 percent respectively in 2030 and 2040, the plan states: “Reject and Reduce means saying no to single-use items, avoiding single-use plastics and packaging and saying no to participating in unsustainable practices . “

For comparison, Houston and Fort Worth had an estimated redirection rate of 21 percent in 2016, and Austin 42 percent.

Environmentalists hope that single-use plastics – like cutlery and cups or bags that easily get caught on tree branches – won’t be around for long. But it will likely take pressure from private industry to make changes.

“Legislation is already moving in that direction,” says Baxter, who notes that the US is years behind Europe in terms of sustainability practices. Texas is even further behind. In 2018, the Texas Supreme Court in Laredo lifted a bag ban after finding it violated a state law prohibiting cities from banning food containers. The next year the legislature refused to visit it again. “Europe is enforcing stricter biodegradability and compostability laws every year that restrict the use of single-use plastics.”

This year the European Union will ban disposable utensils, stirrers and the like. In America too, cities like Boston, Boulder, New York, Los Angeles, Seattle, and San Francisco have bans or restrictions on plastic bags. Baxter and Blandin think it is only a matter of time before more places pass similar laws.

Until that happens, however, corporate benefactors and consumers stand behind environmental choices. “Granted, yes, any sustainable product will cost more than petroleum-based products. Petroleum is pretty cheap. It’s hard to beat, ”Baxter admits, but he adds,“ Studies have shown that customers prefer to visit companies that make sustainable choices. “

There is, of course, an entire compostable packaging industry swelling with eco-friendly options (however green washed and loosely defined “friendly” may be). The most productive of these is a resin known as polylactic acid (PLA), which is made from many compostable plastics.

Much of what is “on the market has to be composted commercially” to break down the material, says Baxter. “That in itself consumes energy.” Without a composting facility, PLA-based products can take as long as normal plastic to break down in a landfill: around 450 years.

PlantSwitch products are naturally biodegraded in 180 days. While PLA is an improvement over conventional plastics, it still sucks up valuable energy. The crop that Perry uses absorbs four to five times more carbon than trees. PlantSwitch avoids environmental problems as it tries to solve others. 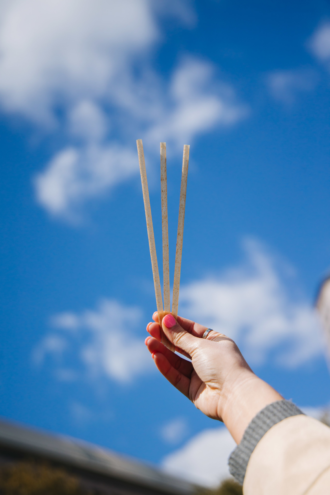 Without a composting facility, PLA-based products can take as long as normal plastic to break down in a landfill: around 450 years. PlantSwitch products are naturally biodegraded in 180 days.

Sharina has been Perry since she was a little girl dreamed in solutions. “As a young girl I wrote down solutions – a utopia.”

Perry’s family has roots in Texas. Her grandparents moved from here to New Mexico, where Perry was born. “My grandfather couldn’t read. When I was seven or eight years old, he always let me read his documents.”

He owned land in New Mexico and a recycling company. “The scrap business, but we called it junking.” Her father worked in oil and gas for Texaco. Even then, a breadcrumb trail led Perry to her later composting work – a form of recycling and an answer to petroleum. In a way it seems predetermined, but it wasn’t a direct journey.

Perry studied English and political science. She had a full career in cable and internet as a government entrepreneur. She only began researching different plant materials and their possible uses when necessary.

A few years ago, her nephew, then 19, was diagnosed with neurofibromatosis. The condition causes tumors to form throughout the body, particularly in the brain, spinal cord, and nerves. “He was that lively boy, but [neurofibromatosis] changed the quality of his life, ”says Perry. There is no cure and it can last a lifetime.

“My sister came to me [when] He had an operation in Dallas and she said, “You have to find something that will help him.” Perry immersed himself in plants and created natural products that relieved inflammation. This led to the wellness section of her growing company Utopia.

When her paper straw died a damp death in her cup of water, Perry aimed at a new target with the same problem-solving confidence.

“I don’t have a degree in chemistry,” she said. “I made my first prototype paper straw in my kitchen just because I believed I could use plant material to make it.”

She started testing a hemp straw in the fall of 2018. She quickly switched from her kitchen sink tests to working with manufacturer Hoffmaster to use her science to make straws commercially. After a year of tweaking and testing, she had a plant resin for her straw. Last February, she had launched a stable product.

Perry’s patent attorneys were impressed. “They said, ‘You embarrassed the big boys with this,” she says.

When she was a kid, she wrote down solutions – utopias, as she called them – “I told my parents that when I was 50 I would change the world,” says Perry. “I’m 47 now.”

TO-GO CONTAINERS WITH INCREASING FREQUENCY and Plastic forks wrapped in plastic are part of our diet. Take-out and delivery increased before COVID. Added to this are roadside offers, the growth of ghost kitchens and fast-casual restaurants replacing fine dining. The way we eat is changing. The ships that transport our meals could too, if PlantSwitch had something to say about them.

When you think of composting, “Obviously, your brain doesn’t go into the Dallas, Texas population,” says Baxter. “It’s not a blow to Dallas,” he says, but the warm welcome from the city is “one of the things that surprised us.” Perhaps there will be progress after all.

It’s okay to be skeptical of consuming more as the ultimate answer to tackling waste or big bad climate change. A greener straw or mug that will biodegrade if thrown in your yard is unlikely to save the planet. But it is a start.

These three would say it might even be the vegetable straw that breaks the camel’s back in an environmental awakening.