New Dallas towers fall short of the city’s past skyscrapers

The news that a 40-story building is in the works for the Uptown area has caused quite a stir. No wonder there.

We love our tall buildings in Dallas – although there haven’t been many new skyscrapers in the past few decades.

Most of the buildings constructed in Dallas since the 1980s have failed to hit the skyline’s earlier highs.

In the past, all developers in the city center competed for who could build the tallest skyscraper.

Nowadays, it’s all about seeing who has the fanciest restaurants, tenant lounges, and rooftop terraces to attract tenants to high-rise buildings in Dallas.

Equipment – not size – is most important when it comes to new projects en route in uptown, downtown, and the suburbs.

“Today’s buildings are not bigger, but they are better – both as a workplace and as architecture,” said Duncan Fulton, a founding partner of the GFF architectural firm in Dallas. “The amenities are better. The placement is better. The connections to the urban fabric are better.

“The shapes and skins are better and more interesting,” he said. “It’s a different time, and today’s developers and architects devote their time, energy, and attention to different things.”

Dallas’ first so-called skyscraper was the now demolished Praetorian building on Main Street. When the ornate building opened in 1908, people paid a quarter to climb the 15 floors and look out over Dallas.

When the 29-story Magnolia building opened in 1922, it was touted as the tallest tower in Texas and one of the tallest buildings west of the Mississippi.

Most of the really tall buildings in Dallas over the past few decades were built as homes for the city’s big banks.

There are fewer local banks these days. Maybe that’s why we don’t see many skyscrapers that are as committed to the ego as they are to the economy. Most new towers are built to be rented out and sold to investors.

“A lot of developers either choose to do it or have to be challenged by equity to move forward with projects so quickly these days. There is not enough time to really conceive the unique vision.”

The tallest tower currently soaring on the Dallas skyline is the 46-story Amli Fountain Place, a high-rise apartment project under construction on Field Street on the north edge of downtown.

The new residential tower is an echo of the past. The design elements and green glass come from the taller, three-decade-old Fountain Place skyscraper next door.

Across the street from Amli’s new building is an empty block where developers received approval to zoning a 100-story tower back in the 1980s.

A real estate crash killed the supertower before it fell off the drawing board.

Changes in development economics make it unlikely that a building of this height will appear in Big D anytime soon.

The current upper limit for the local building height is far behind the previous efforts of the building owners. 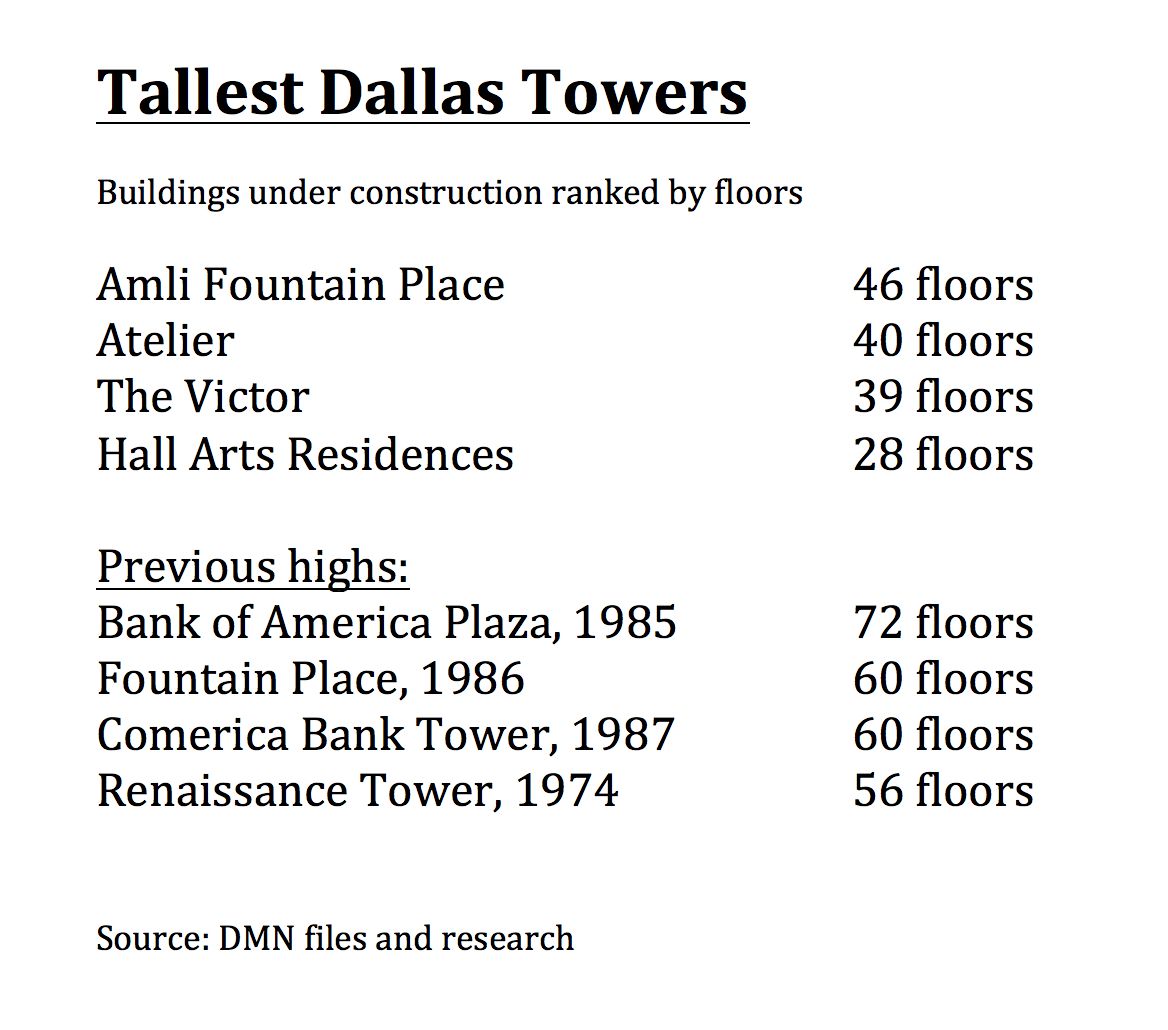 Where To Safely See Christmas Lights in Dallas This Year