More than 1,000 incoming and outgoing flights were canceled on Thursday morning at DFW International Airport and Dallas Love Field, with another blanket of snow making an already difficult travel situation difficult.

The majority of the cancellations were made at DFW International Airport, where more than 950 flights have been canceled, according to Flightaware.com, as American Airlines pre-emptively dropped flights in and out of its hub. By directing customers to other airports, the airline can only focus on passengers who need to travel through Texas.

Dallas Love Field had 90 cancellations at the hometown airport for Southwest Airlines, which in the past few days have also been working to move passengers away from Texas unless they had to board and disembark in the frozen state.

In fact, Texas airports are responsible for the majority of cancellations and delays across the country. Houston, Austin, and San Antonio airports are still extremely reduced capacity in regions that may not be as snowy as Dallas.

There were more than 560 cancellations at the George Bush Intercontinental Airport in Houston, where temperatures are expected to reach 37 degrees on Wednesday.

DFW Airport was able to clear enough runways for landings and take-offs on Wednesday after a new loop of snow fell on the airport overnight, said airport spokesman Bill Begley.

However, getting to and from the airport can be more difficult than getting in the air, despite the fact that local authorities are busy treating roads for driving.

American Airlines canceled around 1,000 flights across the system on Wednesday, including 479 departures at DFW International Airport.

Southwest has canceled approximately 275 flights through its network, roughly 14% of its total flight schedule. The Dallas-based airline planned to operate about 61 flights on Wednesday, but much of that is based on today’s weather.

Still, some passengers are stranded from the weather.

“We’ve had a lot of overnight passengers so we have few cribs to spend, but we still have supplies of blankets and pillows,” said Chris Perry, Dallas Love Field spokesman.

Perry said they are working to get more cribs, blankets and supplies for Wednesday night. 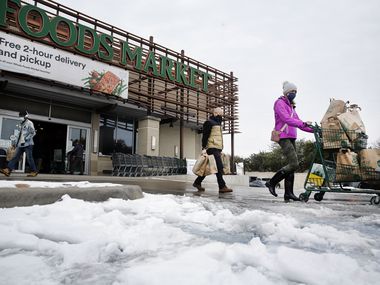