Nothing can stop Mav’s legend Dirk Nowitzki when he has a goal in mind; No double team, no retirement or no global pandemic can even slow it down. The tall German is busy doing something he has often done since arriving in Dallas: helping the community.

On Thursday, Nowitzki spent the afternoon with Mark Cuban and the North Texas Food Bank handing out boxes of groceries to 350 families in Dallas.

“These are difficult times, stressful times for many families. It’s obviously a lot more stressful when you don’t know where your next meal is coming from, “said Nowitzki.” So we wanted to help as much as possible. “

The Dallas legend has long been known for his charitable work. From Uncle Dirk, who visits children in the hospital without fanfare or a camera, to his annual baseball and tennis games for charity, Nowitzki is committed to the city of Dallas.

Nowitzki and Cuban will participate in several future boxing handouts between now and Christmas. During this period, the North Texas Food Bank will need most of the help.

Trina Terrell-Andrews, CEO of the Mark Cuban Heroes Basketball Center, said the North Texas Food Bank is expecting turkey and other food shortages this year. So Cuban and Nowitzki provided each of the families who received boxes with a turkey voucher from Pappas restaurants.

“In difficult times there is great resilience,” said Nowitzki. “People come together and try to help people. That’s what life is about. “

Times may be tough this season, but with a legend like Nowitzki they just get a little easier. 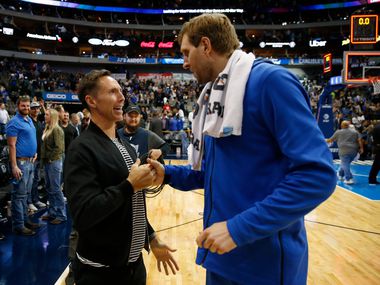