Here’s a look at big moments in architecture as we celebrate the highs, lows and uh-ohs of the departing decade in Dallas culture, 2010-2019.

The Dallas Arts District has made progress over the last decade, even if it still feels a little dead at times. (Tom Fox / Staff Photographer)

Growing pains in the Arts District

It’s easy to take the Arts District for granted — easy, because even after a decade of building it still has a tendency to feel, well, kind of dead. It’s not for a shortage of big-name architects. Additions to the district over the last 10 years have included Norman Foster’s AT&T Performing Arts Center, OMA’s Wyly Theatre, SOM’s Moody Performance Hall, and Allied Works’ expansion of the Booker T. Washington High School for the Performing and Visual Arts. A bevy of less-impressive towers are filling in around these signature projects, with the ill-conceived Museum Tower being the most notorious. While all this building has gone on, a master plan for the district has sat on a shelf, waiting for implementation. Most cities, one should note, make the urban plan, and then allow for the building. Here, we do it in reverse and pay the price, which is empty streets. Still, we have some really nice buildings, and with the new development, there is potential for new life. 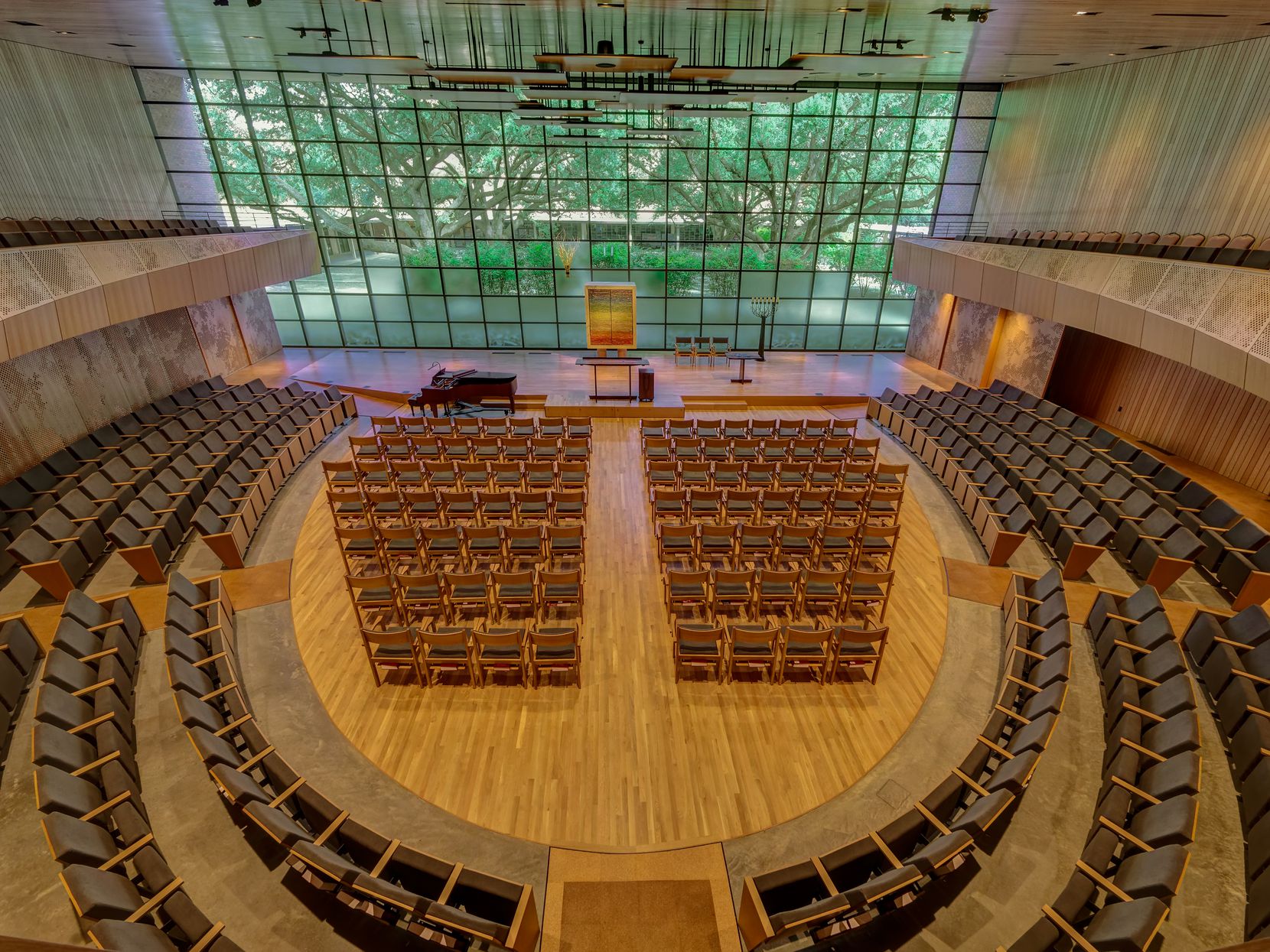 The Temple Emanu-El expansion is among the bright spots in the last decade of Dallas architecture.(James F. Wilson / Cunningham Architects) 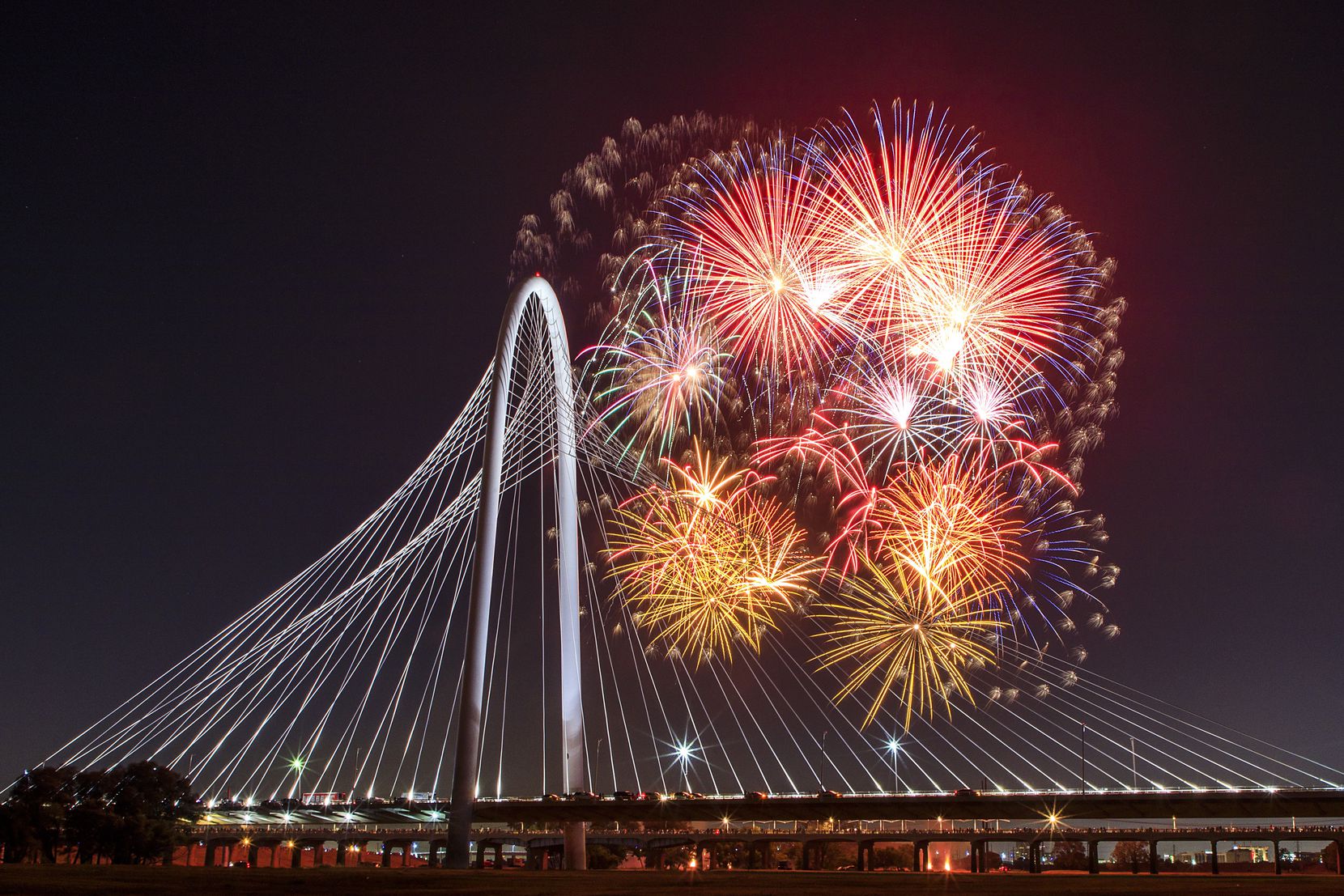 In a fit of skyline-altering extravagance that we will probably never see again, Dallas managed to open not one but two bridges designed by Spanish shape-wizard Santiago Calatrava, each named for a beloved matriarch named Margaret. Like most everything built by Calatrava, the Margaret Hunt Hill Bridge and the Margaret McDermott Bridge were massively expensive, dogged by construction problems, needlessly grandiose, uniformly white and — arguably — beautiful. At least, with the former, there was a purpose in the ostentation: the creation of a signal gateway to West Dallas, which has rapidly gentrified since the bridge’s inauguration. Of course, despite the big price tag, the bridge made no accommodation for pedestrians or cyclists, a fact only partially ameliorated by the transformation of the erstwhile Continental Avenue Bridge into a car-free elevated park. Call that a victory. 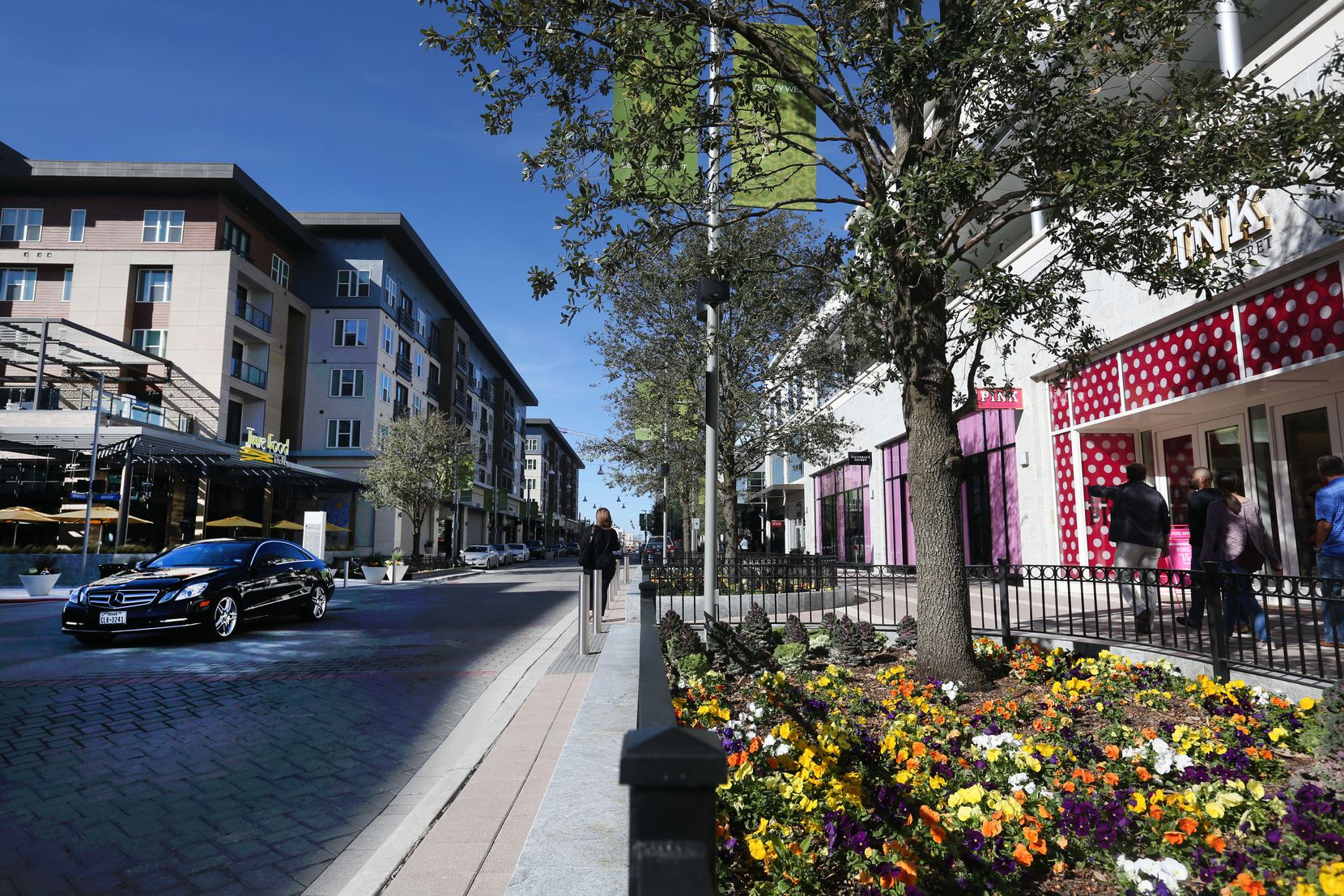 The fall of sprawl’s thrall?

Yes, the cookie-cutter developments continued to sprout in the hinterlands, but the younger set returned to the city, and even those who remained out in the burbs clamored for reform. In Plano, in McKinney, in Frisco, and points beyond, suburban centers began emphasizing walkability and rail connection to the city, even as they remained principally automotive in nature. (They also became a lot more diverse.) Even Jerry Jones, always with a keen eye for opportunity, noticed the trend, the result being his own mini-city devoted to football: the Star, an antiseptic paradise for Cowboys fans. 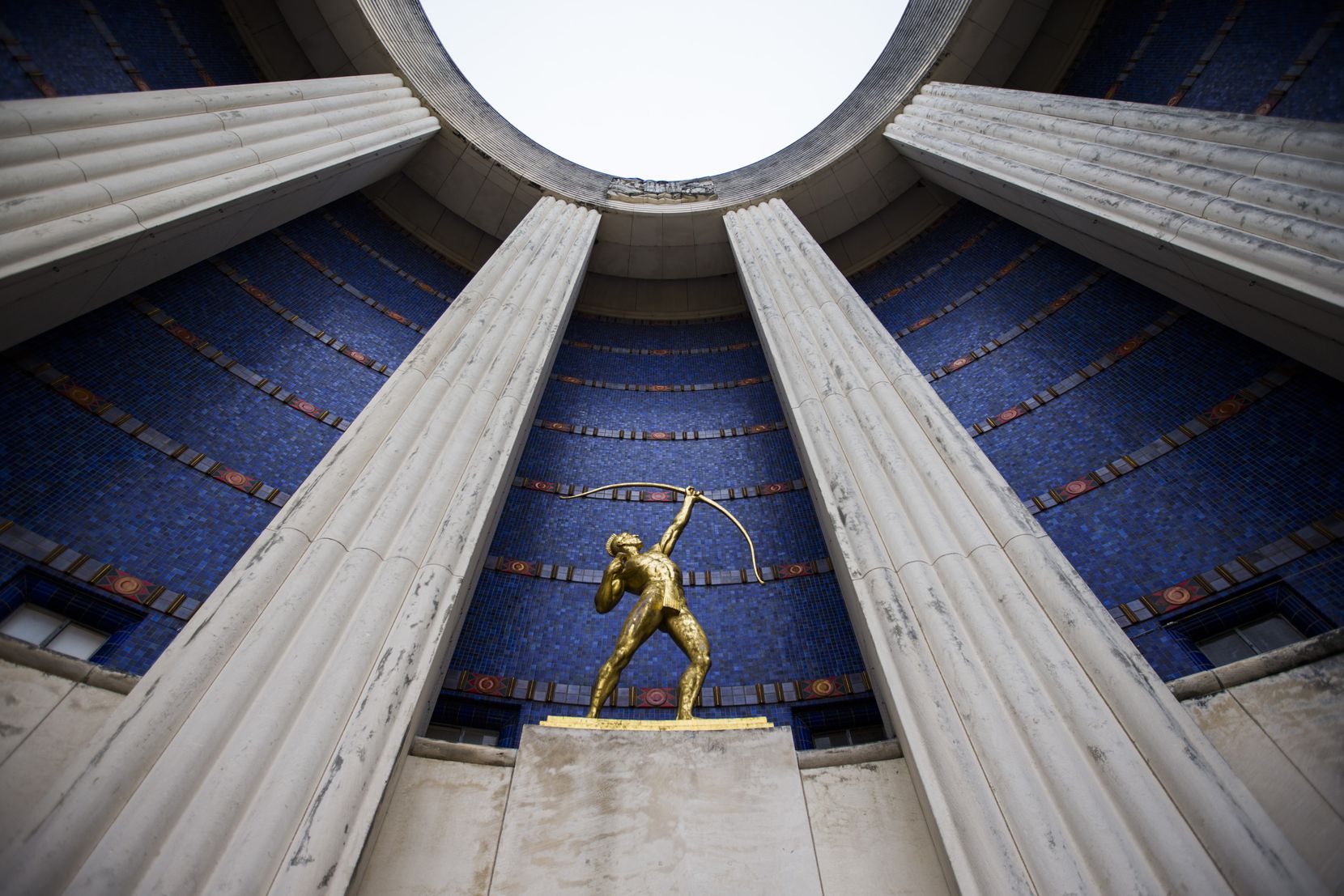 Fair Park’s historic Hall of State building is due for a $15 million face-lift.(Ashley Landis / Staff Photographer)

The eternal quest for a Fair Park plan

Did you have a plan to save Fair Park? It seemed like everyone did during the 2010s. There were plans, and then more plans, and more plans after that. Every year, we heard lamentations about the state of affairs at the city’s crown jewel — too much concrete, no connection with the neighbors, underuse, decaying landmarks, flooding — and every year there was another plan to save the place that went exactly nowhere. It looked like we might just get through the entire decade with zero progress until, late in 2018, the city finally — finally — signed a 20-year deal with a private management firm with a solid history of running parks. Will this be the answer? The problems are still real, but there’s hope. And a $15 million face-lift for the Hall of State is a good way to kick things off. Fingers crossed. 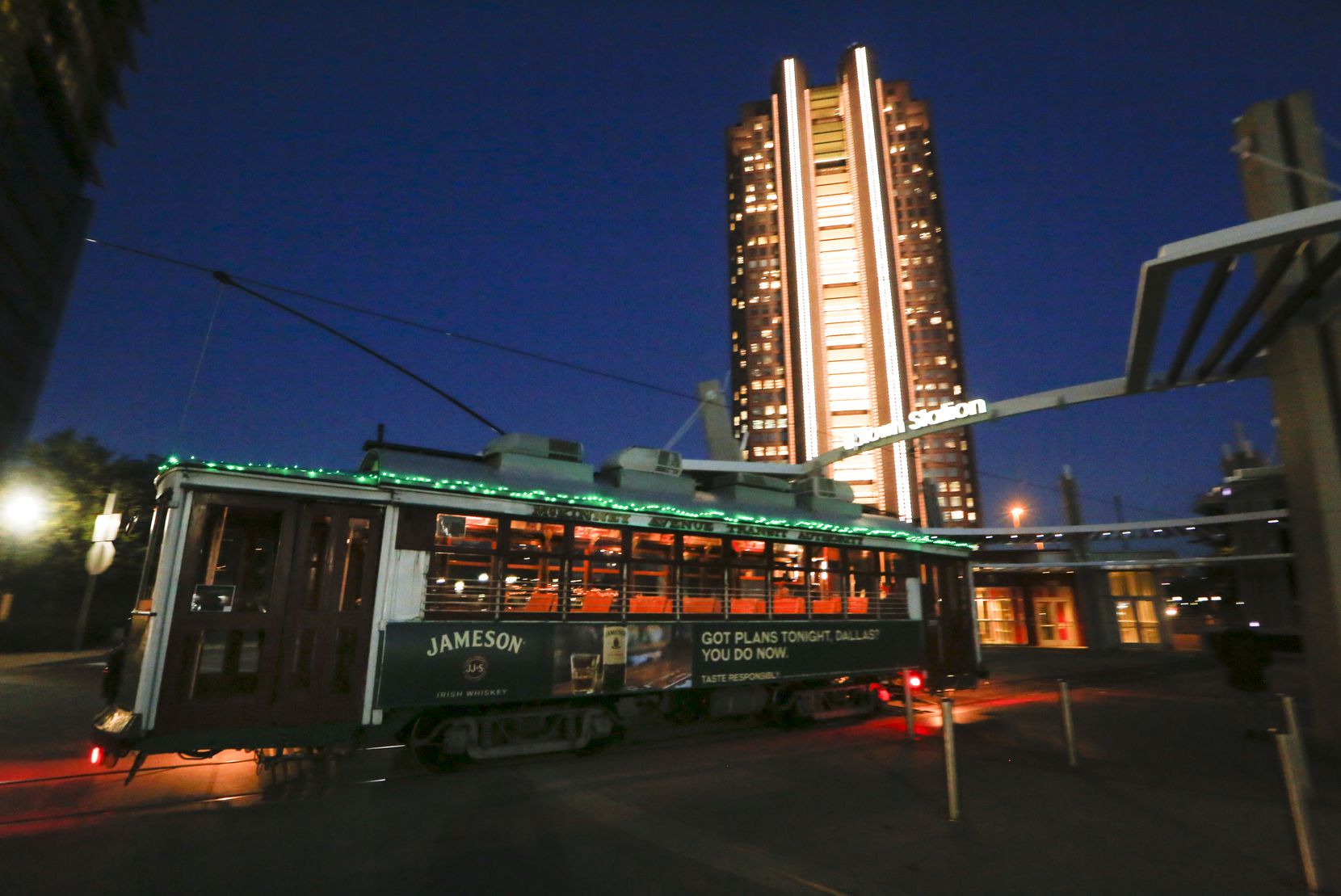 Uptown has reinvented itself as a playground for the millennial set.(Nathan Hunsinger / Staff Photographer)

There grow the neighborhoods

The old saw about downtown Dallas was that the sidewalks roll up at 5 p.m. It’s still not Tokyo, but things are changing. There’s hardly a building left that hasn’t been or isn’t in the process of conversion to residential or office space. Especially pleasing: the Staler’s return. Elsewhere, Uptown has completely reinvented itself as a playground for the millennial set, although with not particularly endearing architectural results. Even Victory, the decade’s chief urban design fail, seems to be making progress. And then, across the river, there’s the little neighborhood that could: Bishop Arts. Remember, like, four years ago, when it was almost bohemian? Now it’s looking more like Uptown. That is the price of gentrification, which is either a scourge or a blessing, depending on one’s point of view. No matter, it has swept the city, and there are no signs of the trend abating anytime soon. 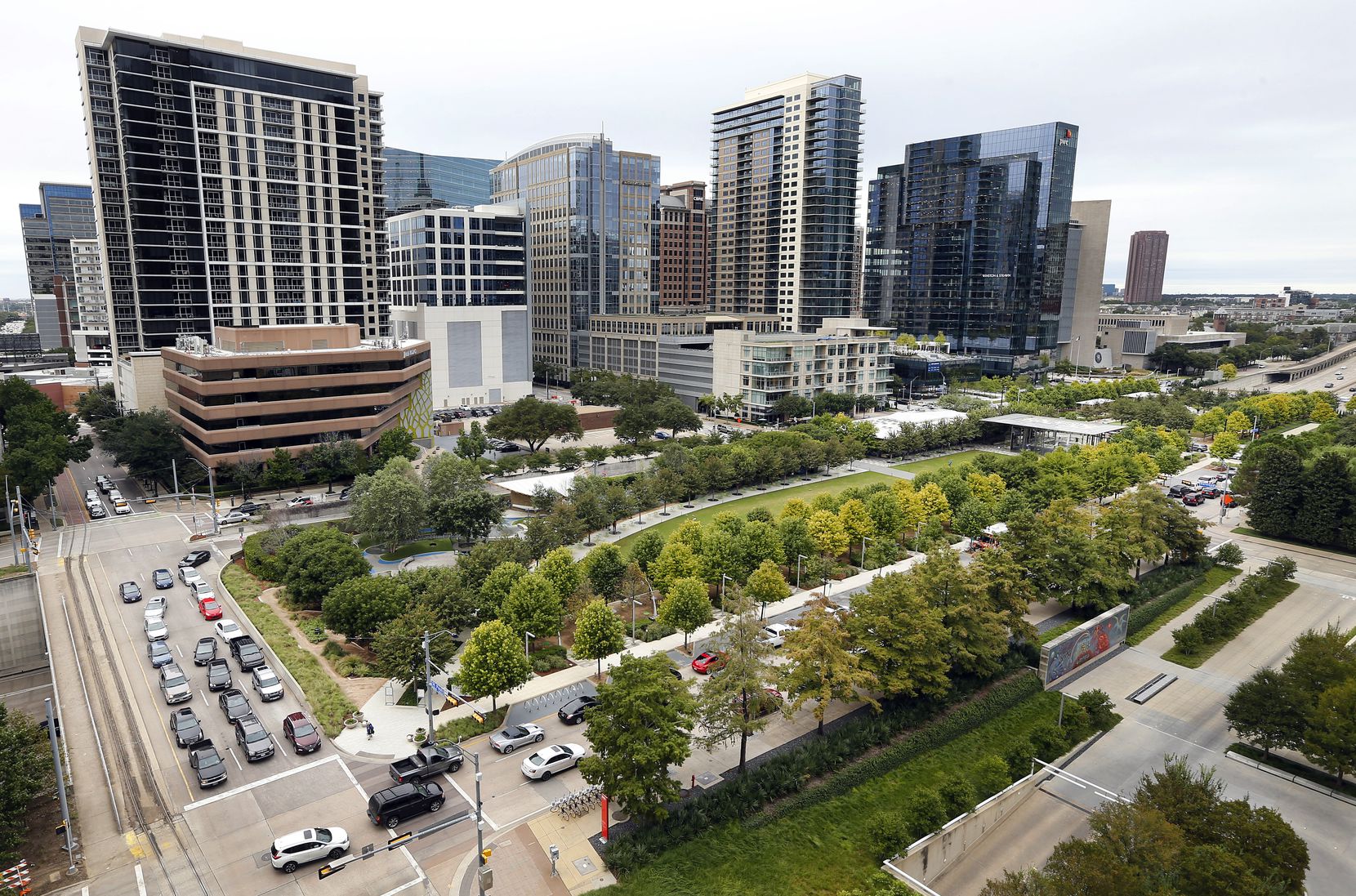 Klyde Warren Park is, unquestionably, the most significant urban achievement of the last decade in Dallas.(Tom Fox / Staff Photographer)

The park that made the city

Let’s not beat around the native grasses: Klyde Warren Park is, unquestionably, the most significant urban achievement of the last decade. The deck park gave the city a genuine front lawn, while suturing together neighborhoods that had been cauterized by the highway. It has been a welcome economic boon to both downtown and Uptown, but that is the least of its contributions. It has brought the city together, both physically and figuratively, and it has pointed to a new way of thinking about urban planning, one that emphasizes pedestrians, not automobiles. In a most unlikely twist, it has made Dallas — Dallas! — a model and inspiration for other cities that would similarly cover their highways with parks. Oh, and the food trucks. Is it perfect? No. The design is a bit of a dog’s breakfast — a little bit of this, a little bit of that — and the expansion plan isn’t going to help; putting up a for-profit event space is not our idea of park building. But still, Klyde Warren is what Dallas needed, and it’s a blessing, full stop. 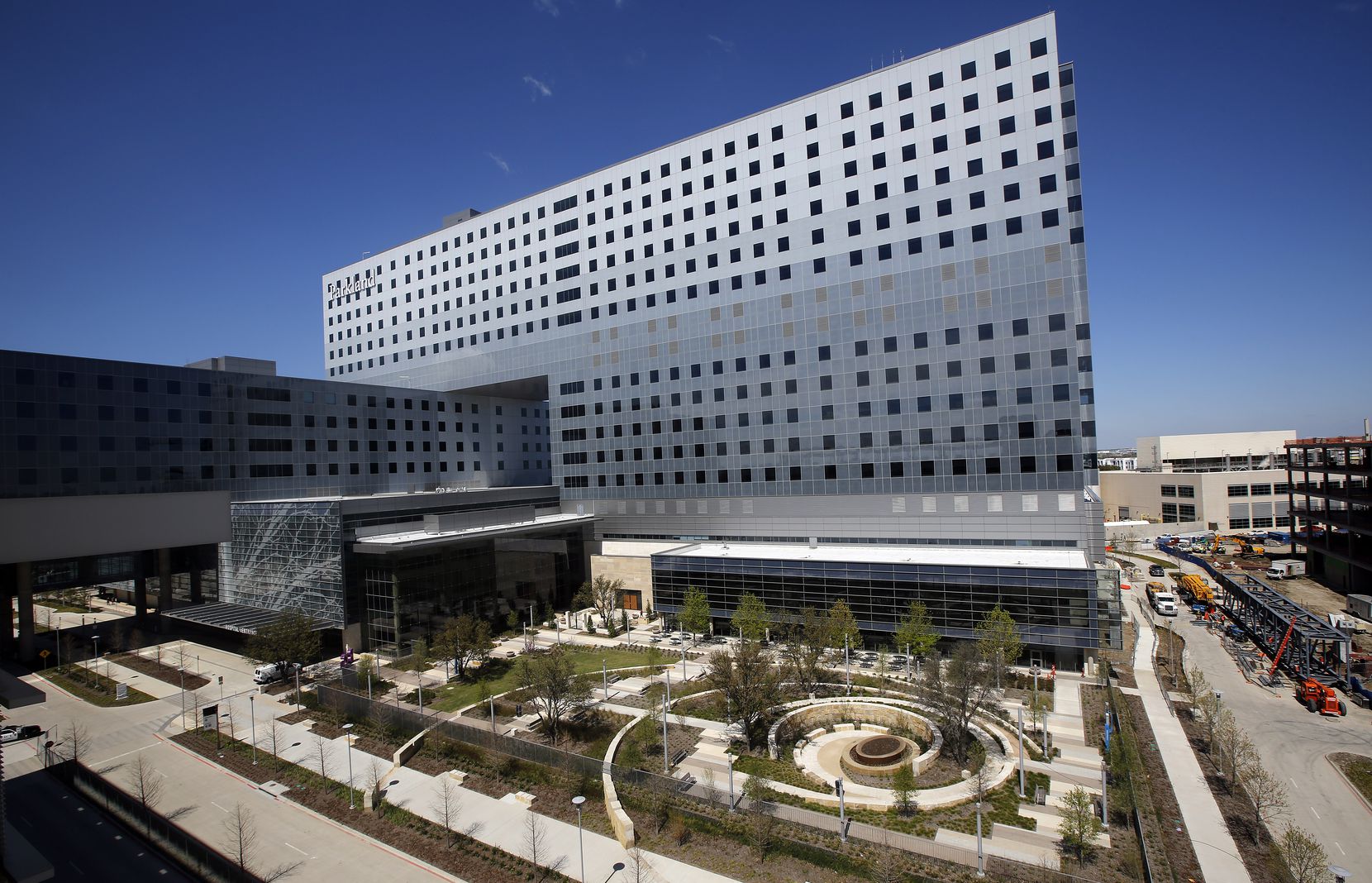 The new Parkland Memorial Hospital was a massive addition to the Dallas landscape.(Tom Fox / Staff Photographer)

If we’re judging by scale alone, there is one project that stands, or stacks, alone as the decade’s biggest: New Parkland, the city’s 17-story, 2.8 million-square-foot, $1.326 billion public hospital. There is something a bit Orwellian about its Tetris-like form and even grid of punched windows (collaboratively designed by HDR and Corgan), but give it credit for a commitment to its own modern principles. Its cantilevered aluminum façades, with their subtle gradients, make for dramatic, or at least idiosyncratic, markers on the skyline. 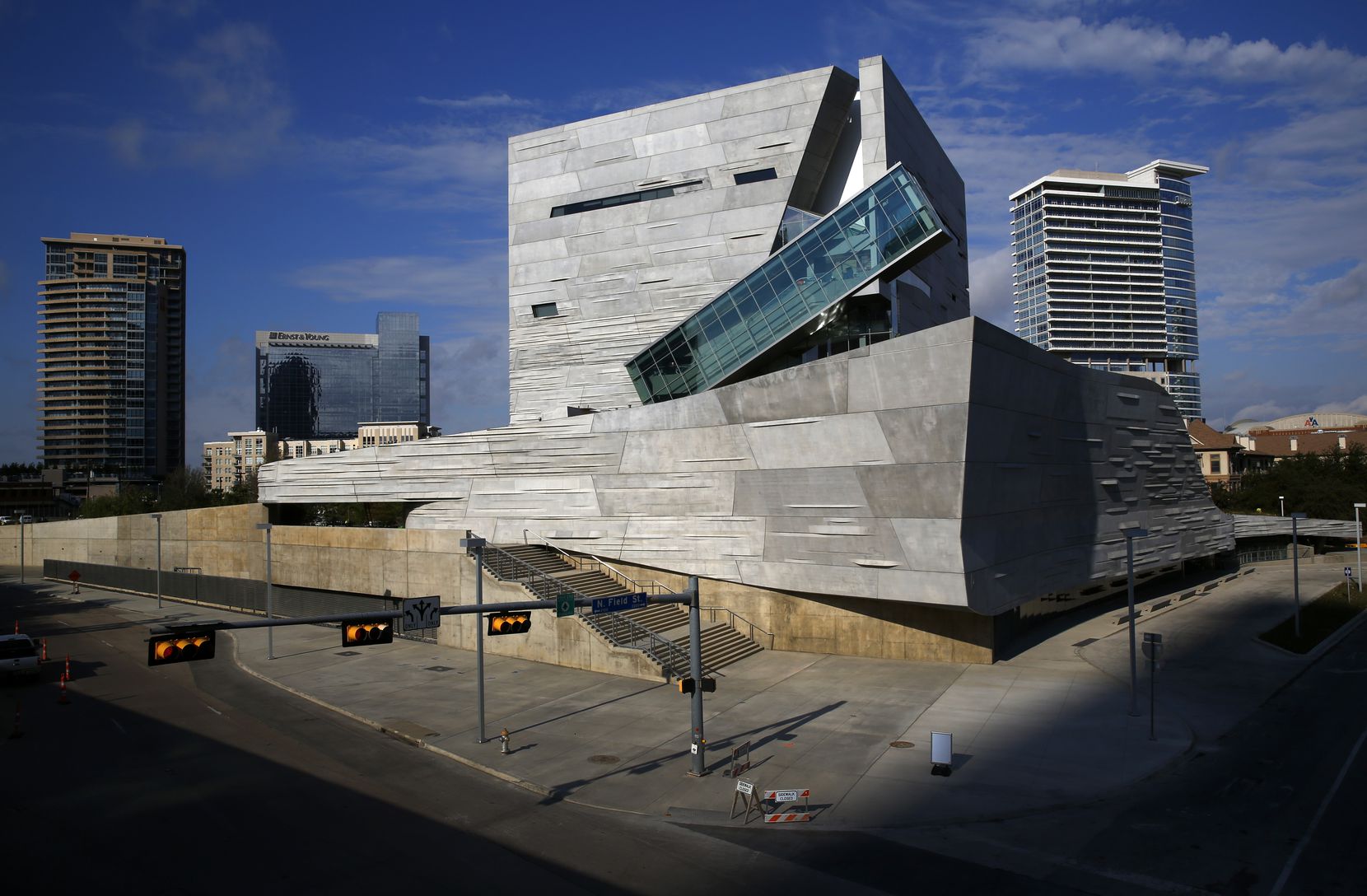 The Perot Museum of Nature and Science was theoretically inspired by the Texas landscape, but it more accurately looks like it was dropped in from outer space, or at least Los Angeles.(Tom Fox / Staff Photographer)

Dallas didn’t get a signature skyscraper in the 2010s, but it did get the Perot Museum of Nature and Science, a weird box designed by Thom Mayne, the form-loving, Pritzker Prize-winning founder of Morphosis Architects. With its striated concrete skin and grassy patches, it’s theoretically inspired by the Texas landscape, but it more accurately looks like it was dropped in from outer space, or at least Los Angeles. (Same thing?) All of Mayne’s energy was given over to the swishy circulation spaces, including that tacked-on, glassed-in elevator, while the exhibit areas are basically dark rooms. And though it preens of its Texas roots, it makes scant attempt to fit itself into the urban fabric and make connections to Klyde Warren Park or the Arts District. Frank Lloyd Wright’s long-neglected Kalita Humphreys Theater is still moldering along Turtle Creek after a conservancy formed to save it was foolishly rebuffed by the city.(Smiley N. Pool / Staff Photographer)

We may look back on the fall of 2014 as the moment when Dallas finally came to its senses and decided to at least make some effort to prevent its built history from being evaporated without warning. You may recall it was then, on a football Sunday when nobody was looking, that a billionaire developer summarily demolished a 129-year-old nationally registered landmark on Main Street. That bit of vandalism finally spurred the city to enact a demolition delay ordinance — although only for downtown. There have been some notable preservation victories since — among them, keeping the midcentury Meadows Building intact and saving the historic Rosenfield House in the Cedars — but still too many losses, including houses by O’Neil Ford, Bud Oglesby, Harwell Hamilton Harris, and others; the Salvation Army Headquarters on Mockingbird Lane; the freedman’s houses on Tenth Street in Oak Lawn; the Green Acre Courts motel; Timberlawn Sanitarium; and the beloved Ambassador Hotel, lost to fire earlier this year. And then there’s the case of Frank Lloyd Wright’s long-neglected Kalita Humphreys Theater, still moldering along Turtle Creek after a conservancy formed to save it was foolishly rebuffed by the city.

Ding, dong the road is dead

The debate monopolized and polarized Dallas for most of the decade: Should the city build a massive urban park — and then run a toll road through it? The debate meandered and meandered, even if the road didn’t, as opposing sides argued about “balanced vision” (it was more like fully occluded vision). Proponents offered a series of preposterous renderings and fantasies, while the rational opposition pointed out that the road would not, in fact, relieve traffic as it promised, and that building a highway in a park did not, to put things politely, conform to best practices in urban planning. But nobody put things nicely. And then finally, miraculously, the city came to its senses and in 2017 killed the toll road. Huzzah! But in doing so it established the terms for the debate that will surely monopolize the city for the next 10 years: Can we actually build the park in the Trinity basin? By 2030, we should have an answer. 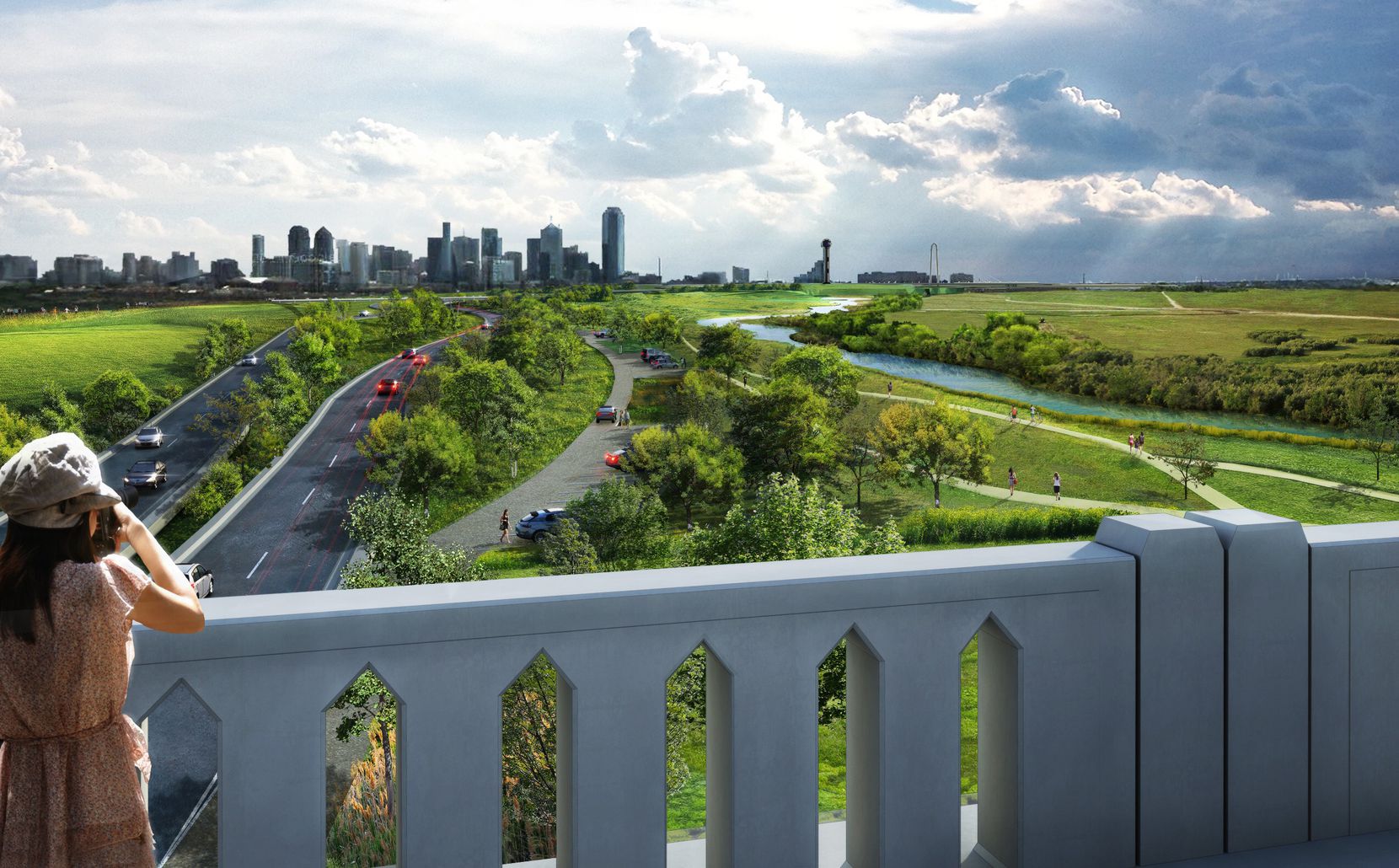 An artist rendering of the potential first phase of Trinity Parkway’s construction shows how the initial iteration of the toll road and a possible parking lot could fit into the footprint of the full-scale version of the road. The view is from the Inwood Road bridge, looking east toward downtown Dallas. (Supplied)

The 2010s were the decade that Dallas turned it around on the urban planning front, finally embracing progressive, pedestrian-friendly practices, if tentatively. But the buildings? Not always so good. If the 1980s gave us the McMansion (and we’re still building them, alas), this decade brought us the Uptown Special, that ungainly five-story greige apartment block. The prize for the worst building of the decade goes to the mother of these dullards, the monstrous Alexan, which lords out over Stemmons in all its banal lack of glory. Runner up: the Hunt Building, the black behemoth looming over Klyde Warren Park, which reaches like some deranged baby for every trick in the architect’s toy box — Curves! Fountains! Lights! — in search of a distinction it never finds. 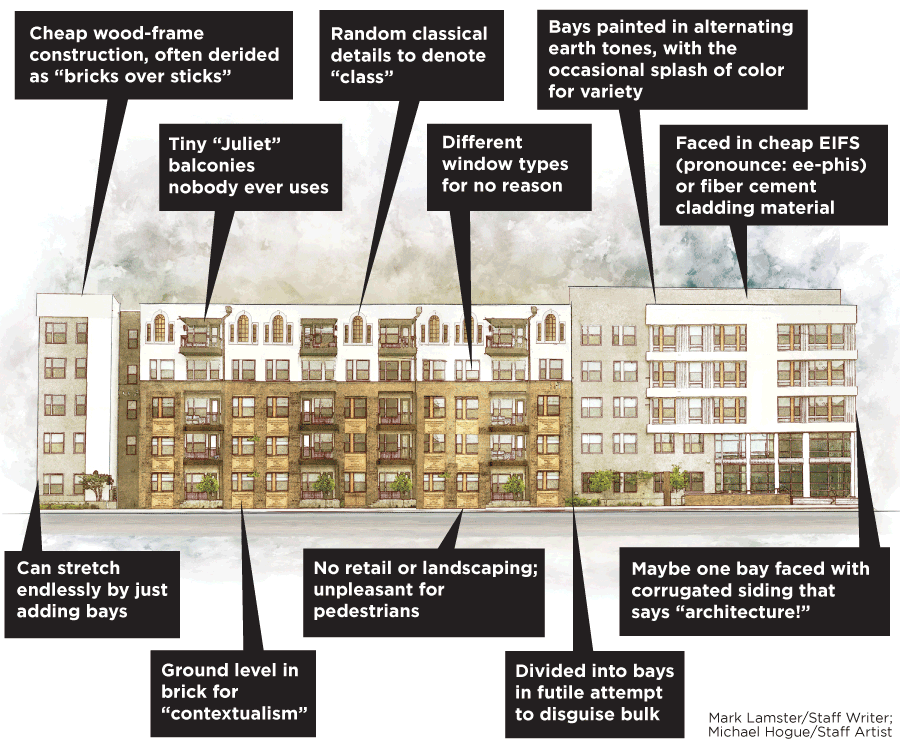 CORRECTION, Dec. 30, 2019 at 10:38 a.m.: This story has been updated to reflect that Bullion Restaurant was designed by architecture firm Gensler, not Omniplan. While Omniplan did design the original tower at 400 S. Record in the early 1980s, Gensler designed the recent updates to the building including Bullion.

Dallas’ Lifestyle Queen Details How Giving Back Changed Her Life: A Junior Forum Moment at the Mansion