The plaster fell off the molding, the paint was damaged, the decorative aluminum was peeling off, the paint on the doors and windows faded and every time there was a heavy rainfall, a large water leak came into the basement – all problems that fair Park’s Hall plagued the State Building, a centerpiece of the 1936 Texas Centennial Exposition.

A few years ago, the Dallas architects Gensler were hired to repair the crumbling complex. This month announced the results of a three-year renovation worth $ 14.4 million made possible by a 2017 voter-approved bond package in Dallas.

The CEO spoke to Project Architect Felicia Santiago to learn more about the process.

Santiago said the process started with a building assessment in 2018 that uncovered humidification issues that were a continuation of problems tried 10 years earlier. “Water is such a killer for all buildings,” and in the space between the Hall of State, where all condensation lines for HVAC lines run, condensation was constantly dripping on the plastered ceilings.

There was moisture throughout the building as well as the ground floor and basement. Gensler noted that the classification around the building did not properly guide the water away from the building, which in theory would protect the building. To solve these problems, Gensler took the help of the MEP mechanical engineers and a building envelope engineer to study the structural aspect of the deterioration due to the water.

The restoration of these problem areas began by removing the old condensing unit and allowing the building to dry out for two months before upgrading the plumbing and installing pans underneath to serve as double protection in the event of future leakage.

When general contractor Phoenix 1 Restoration was on board, Gensler began the very detailed process of restoring the building, as the Hall of State is a landmark of state antiques in Texas and is considered one of the largest and finest examples of art decoration in the nation . To ensure that the restoration is historically correct, Gensler obtained identical materials as in 1936.

The stone used was sourced from Dee Brown, Inc. and is the same Texan limestone that was originally used for the building – the color, texture and size had to match. One of Gensler’s “greatest allies”, as Santiago puts it, was the art curator van Enter Studio, who carried out the color analysis. Jhonny Langer, with SOURCE Conservation, took samples from the building, took them to a laboratory and from there he was able to explain to Gensler the specific colors that were used in 1936.

In addition to the ramps for accessibility, everything was done to ensure the integrity of the building.

Previously, Governor Abbott had come to visit the Hall of State, but since the only access ramp was in the back and his wheelchair couldn’t fit through the door, he had to be carried up the stairs, as you can imagine, not the most flattering or most convenient type of entry. To resolve this issue, Gensler coordinated with the Texas Historical Commission, the Dallas landmark, and the Office of Cultural Affairs to approve a design.

While the only new build was the ramp, great care was taken to ensure the cohesion of design and materials. 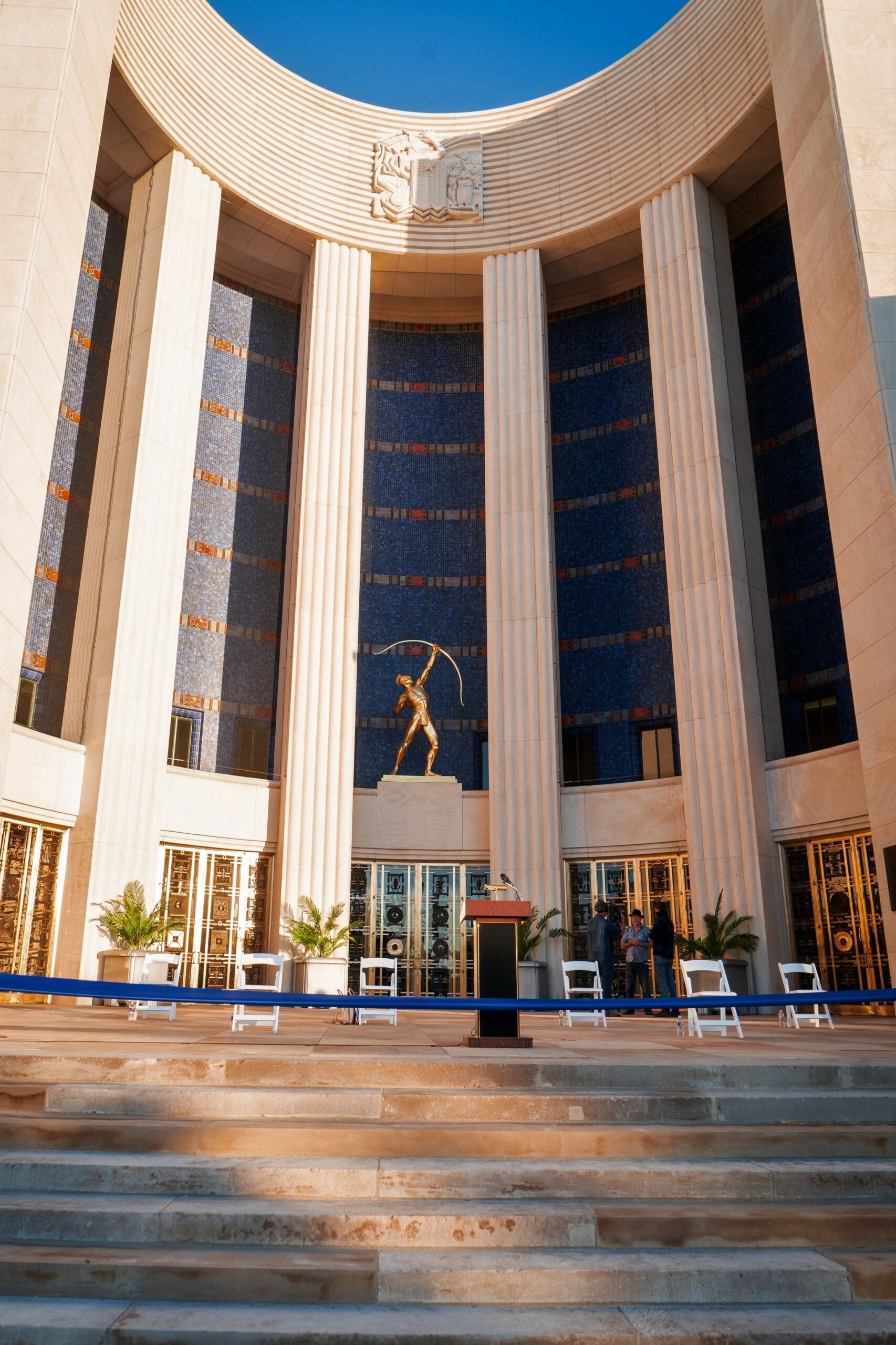 The bronze runs match the bronze material used for the building. The stone is the same limestone that Gensler used for the mending material and the new stone that had to be put on the building, and the concrete path on the ramp is the same concrete appearance as the restored concrete ceiling in the courtyard. In terms of design, the walls of the ramp are the same height as the existing walls and the colonnade floor. The handrails were inspired by the only existing guardrail on site, which is at the rear of the building, where the old entrance to the toilets was, which was separate at the time.

When looking at the building, the restored areas are seamless and have brought the Hall of State back to its former glory.

Perhaps the largest and most significant restoration was the large bronze doors that led into the building. The process was very coordinated by multiple artists and required a local glass artist to slump the glass so that it would fit perfectly into the niche, which was previously unknown.

In addition, Gensler and the artists referred to historical black and white photographs to determine the type and color of the bronze, leading to an agreement on its depth and sculptural aspects.

20 Things You Must Do in Dallas This November