Her Dallas home flooded after a winter storm. Then she and her 4 children found shelter in a hotel

Erika Battie was certain that 2021 would be a year of redemption.

After being laid off by Baylor Scott & White last March, she worked for her cousin’s janitorial company until she was approved for unemployment checks. The money helped a little, but by the end of the year she was still behind on renting and holding off agents for repossession.

The 39-year-old got back on her feet by breeding her American Bully. She had planned to sell a litter of 12 puppies and a dog accessories store was in the works.

Next, a pipe burst and flooded Battie’s four-year-old home. She packed what she could, grabbed her four children and sought protection.

The family of five was floating from door to door until Battie saw a flyer last Sunday from Not My Son, a South Dallas-based nonprofit civic organization.

Shortly after she called, Battie and her children, ages 3-16, stayed at the La Quinta Inn & Suites in North Dallas.

Erika Battie and her four children are currently living in a two bed hotel room in a La Quinta hotel supported by Not My Son Dallas, a nonprofit civic engagement organization, in north Dallas, Wednesday, February 24, 2021. They were out evicted their hotel home in Oak Cliff after the winter storm froze and blew up their pipes, causing them to lose most of their belongings. (Brandon Wade / Special Contributor)(Brandon Wade / Special Contributor)

Battie is one of the many people who were displaced by the winter storm and who sheltered My Son in need. The non-profit organization’s staff have been working for nearly two weeks to house, feed, and provide food for more than 600 families that cannot return to their homes.

The La Quinta is one of seven hotels the non-profit organization has worked with. In a conference room just off the lobby, diaper boxes are stacked from the floor ceiling and cover a wall. Opposite the pampering there are boxes of water on folding tables. Toiletries and toys are in the front of the room, and the back is reserved for various needs: feminine products, creams and oils for black hair care. 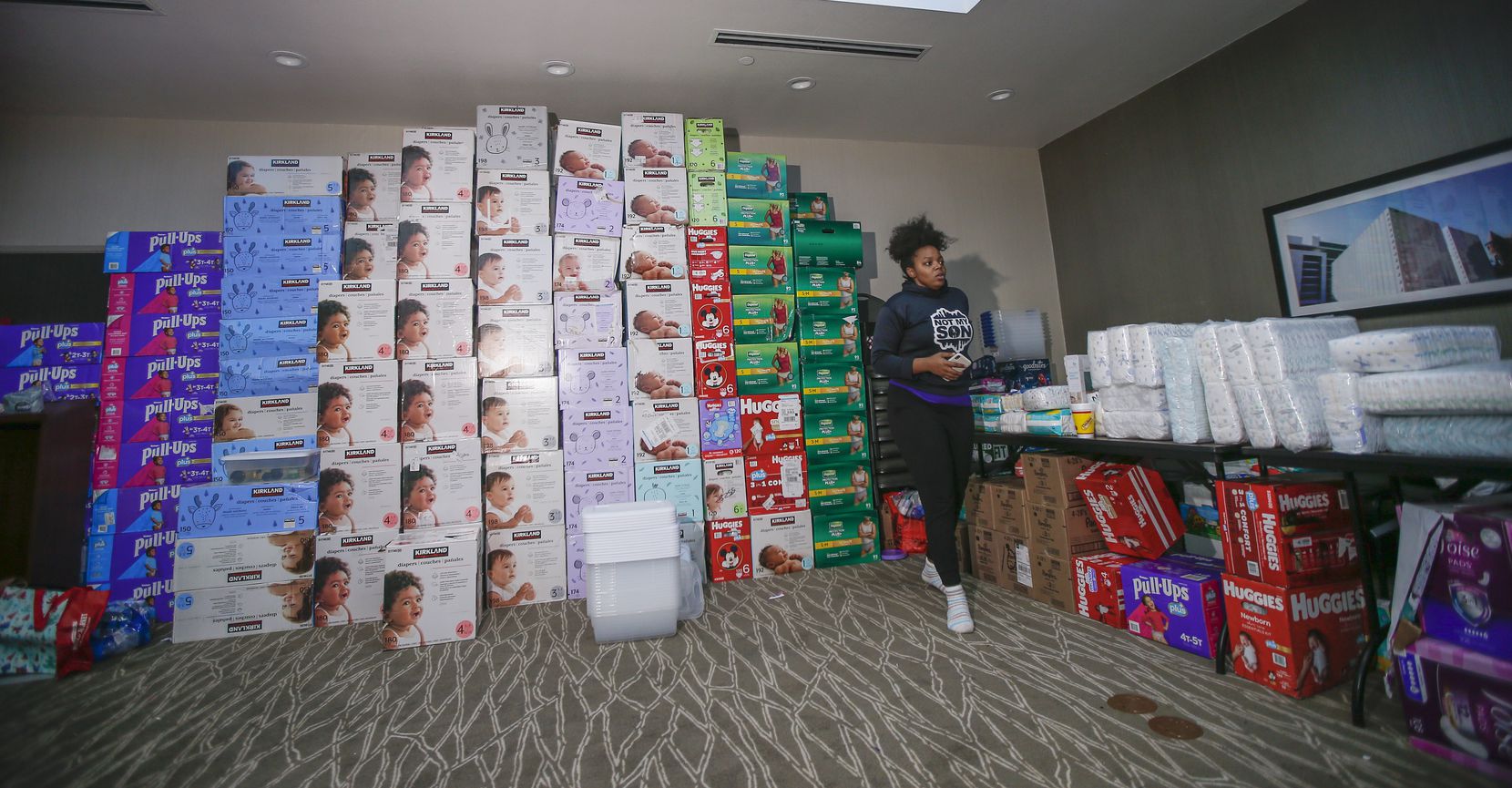 Christina Scott, Community Outreach Manager for Not My Son Dallas, sorts donated diapers at a La Quinta hotel in north Dallas on Wednesday, February 24, 2021. Scott said they need bath towels, black hair products, and baby wipes. If you want to donate, you can drop off the LaQuinta Hotel at 13175 N. Central Expressway. Not My Son, a non-profit organization, has been helping people displaced by the winter storm since last week. They have spent thousands of dollars on hotel reservations while other organizations and local restaurants donated groceries, toiletries, and other necessities. (Brandon Wade / Special Contributor)(Brandon Wade / Special Contributor)

However, the donations for the conference room are new. When Not My Son first started answering calls, the organization did not have a cash reserve to help people in need.

“I had to put about $ 7,000 in my savings account to pay for some hotel rooms for people,” said Christina Scott, community outreach manager for Not My Son.

“As long as donations are received, we can stay at the hotel, but it’s still an everyday process.”

The other five employees from Scott and Not My Son have slept little in the past few weeks as they coordinated hotel check-in and donations. They have relied on other community groups for help, and hotel residents have interfered as well.

Battie and her cousin have volunteered to clean the rooms to reduce the demand from hotel staff.

Dominique Robinson, who has been at La Quinta for over a week with his wife and 3-year-old son, has, among other things, unloaded trucks with donations and stacked the diaper wall in the conference room.

Gertoria Brown also spent a lot of time in the donation room. She tracks inventory and distributes items to other residents in need. Brown has been at the hotel with her 6 year old son for almost a week.

“It’s just the heart we have,” said Robinson, a native of South Dallas. “It’s basically the community that comes together to make everyone feel good. We are all in need. “ 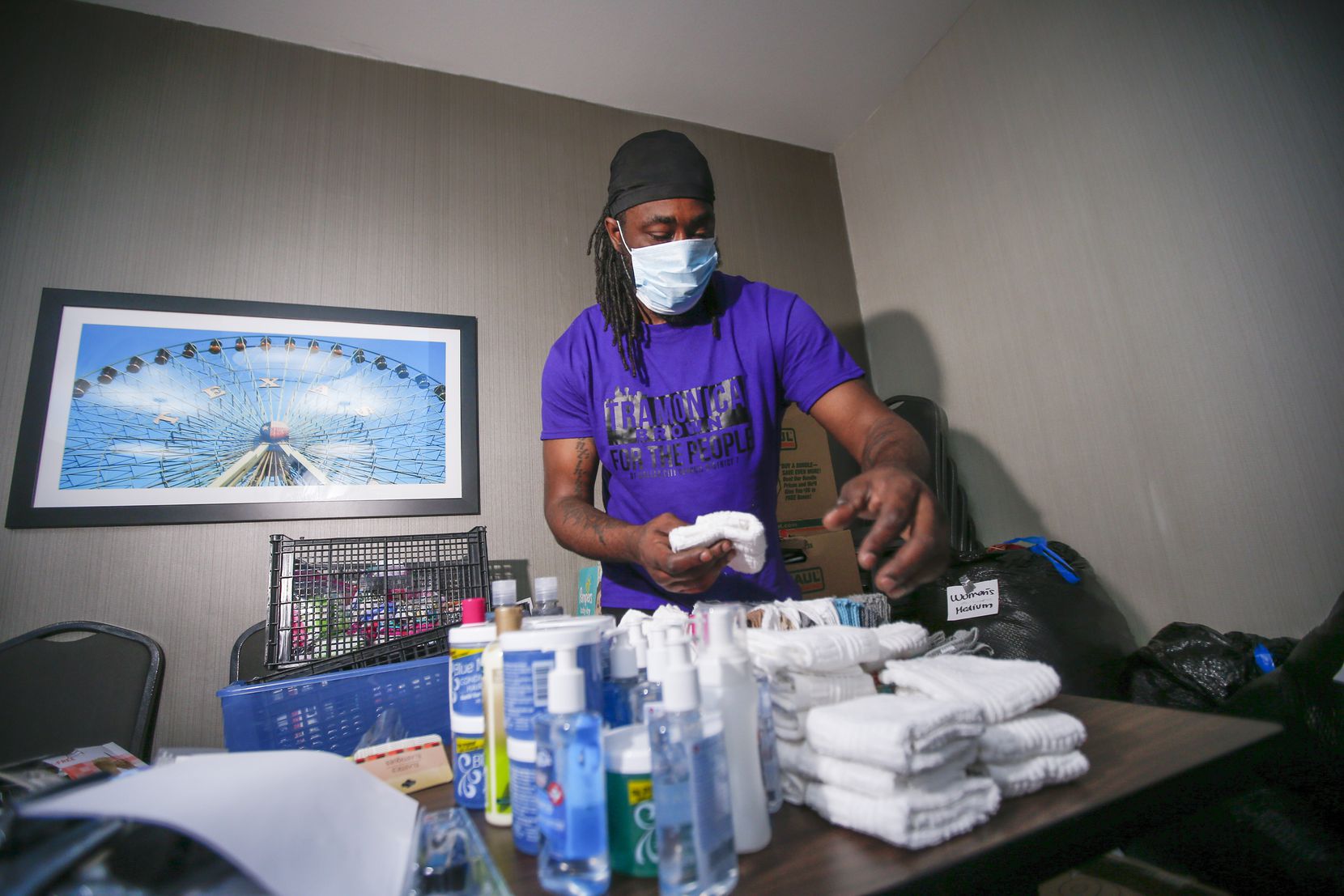 Dominique Robinson, a volunteer with Not My Son Dallas, sorts donated toiletries at a La Quinta, north Dallas hotel on Wednesday, February 24, 2021. Bath towels, black hair products, and baby wipes are some of the things most needed for those displaced by the winter storm. If you want to donate, you can drop off the LaQuinta Hotel at 13175 N Central Expressway. Not My Son, a non-profit organization, has been helping people displaced by the winter storm since last week. They have spent thousands of dollars on hotel reservations while other organizations and local restaurants donated groceries, toiletries, and other necessities. (Brandon Wade / Special Contributor)(Brandon Wade / Special Contributor)

Although many people have offered their services, the displaced families need material goods such as towels. Many rooms at the La Quinta are occupied by families of more than five, and there aren’t enough towels to go around.

The residents also need clothing. The two clothes bags Battie had brought ended up in the trash because they were already soiled by the flood. She didn’t have enough money to do more than one load of laundry in the hotel.

In the lobby, staff and volunteers put tables together to create a makeshift online school for students studying virtually. Most of the children did not wear socks. Battie’s children, who still go to school in Oak Cliff, walked without socks for days until a family parted theirs.

“I’m wearing the same socks I’ve been wearing for three days so my kids can wear them to school,” Battie said. “I let them go to school so they could feel like they had something.”

Every morning after dropping the kids off at school, she rushes back to North Dallas to check in at the hotel. Residents must go through the check-in process on a daily basis, otherwise there is a risk of losing their room. At around 3 p.m., she makes the 17-mile trip to Oak Cliff to pick her up. She also comes to her home to feed the dogs. Battie’s landlord plans to start repairs next week.

Once her kids are back at the hotel, she tells them to stay in the room and bring any dinner from the lobby.

“We’re with a lot of people right now,” Battie said. “I try to keep the kids away from everyone so we don’t get sick because we’re still in the middle of a pandemic.”

Battie said she’s had trouble smiling lately, but when she needs inspiration she reads Matthew 7: 7 from the Bible: “Ask and it will be given to you; Search and you will find; knock and it will be opened for you. “

You also need tutors for students.