We may never stop clucking about Nashville hot chicken in Dallas. Or so it seems: Hot chicken chains like Hattie B’s, out of Nashville, are coming to Dallas. Already here are homegrown chicken concepts from local restaurateurs: S&J’s Hot Chick, Ricky’s Hot Chicken, Hot Chicks and more.

All seem to want a piece of Dallas’ hottest food trend of the past 18 months.

And despite its visibility, restaurateurs are also opening invisible hot chicken businesses. Where can Dallasites find Sarah’s Hot Chicken, I asked a spokeswoman? In Plano, but it doesn’t really matter: This new ghost kitchen from the folks behind Half Shells and Fish City Grill is selling Sarah’s food for delivery only.

Consumers have started commenting on the colossal number of Nashville hot chicken restaurants in Dallas-Fort Worth. Some of the restaurants feel formulaic: Make a cayenne-based spice rub, offer it in three to six levels of heat. Serve up some Southern sides.

But seriously, have we hit peak chicken? It’s getting hot in here.

It’s time to revisit all the Nashville hot chicken joints in Dallas-Fort Worth and look ahead to the restaurants opening soon. 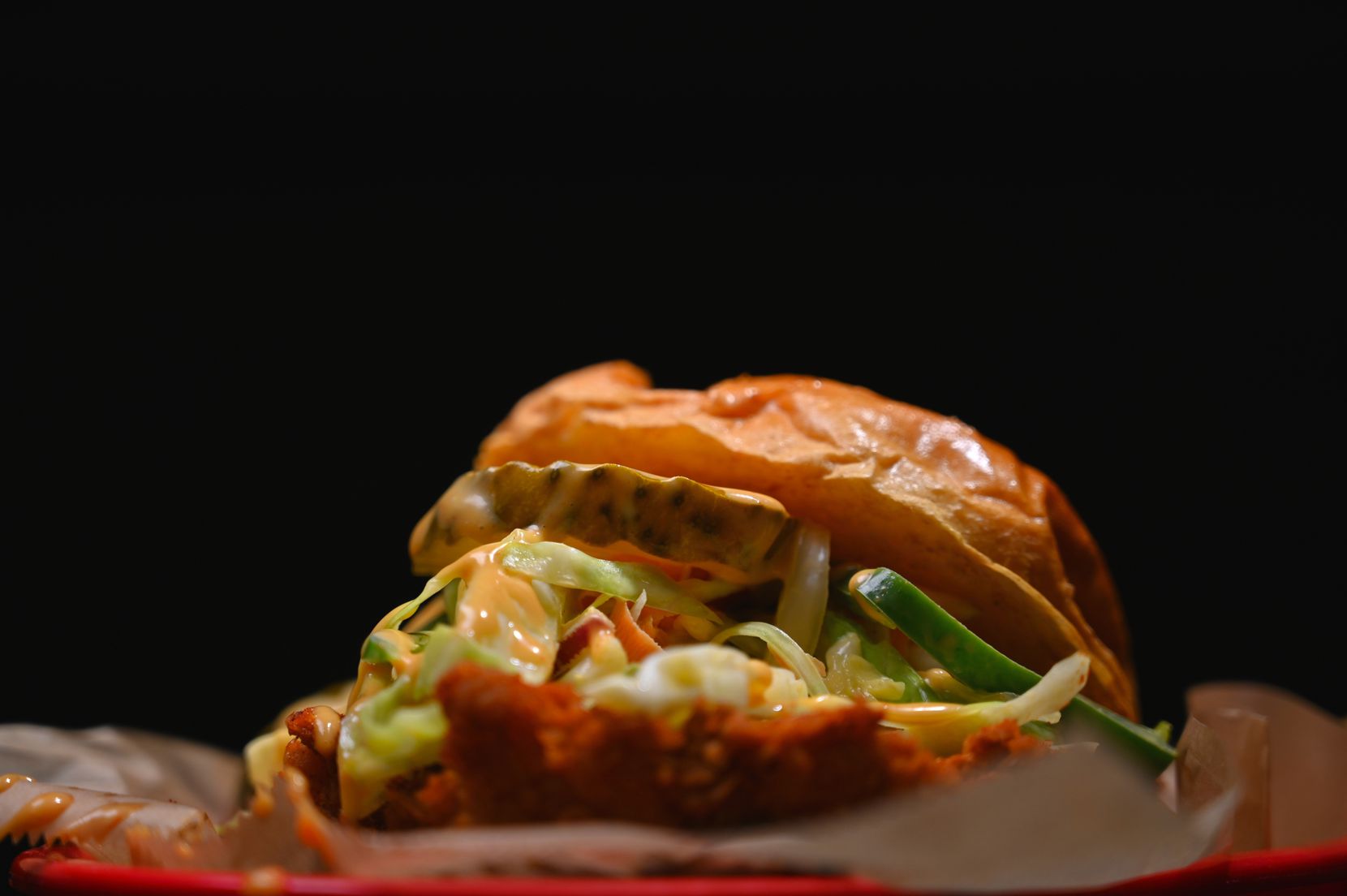 S&J’s Hot Chick: S&J’s Hot Chick is expected to open in Northwest Dallas, near the crux of Northwest Highway and Interstate 35E, in the next few weeks. Chef Nathan Black, who worked at Pink Magnolia in Oak Cliff (and is married to chef Blythe Beck), created S&J’s menu. The restaurant will be halal and will therefore not sell alcohol. In addition to traditional hot chicken options, S&J’s will also have sandwiches with faux-meat chicken, fried fish and portobello mushrooms, to cater to vegans and vegetarians. S&J’s Hot Chick is at 2201 W. Northwest Highway, Dallas. snjhotchick.com. 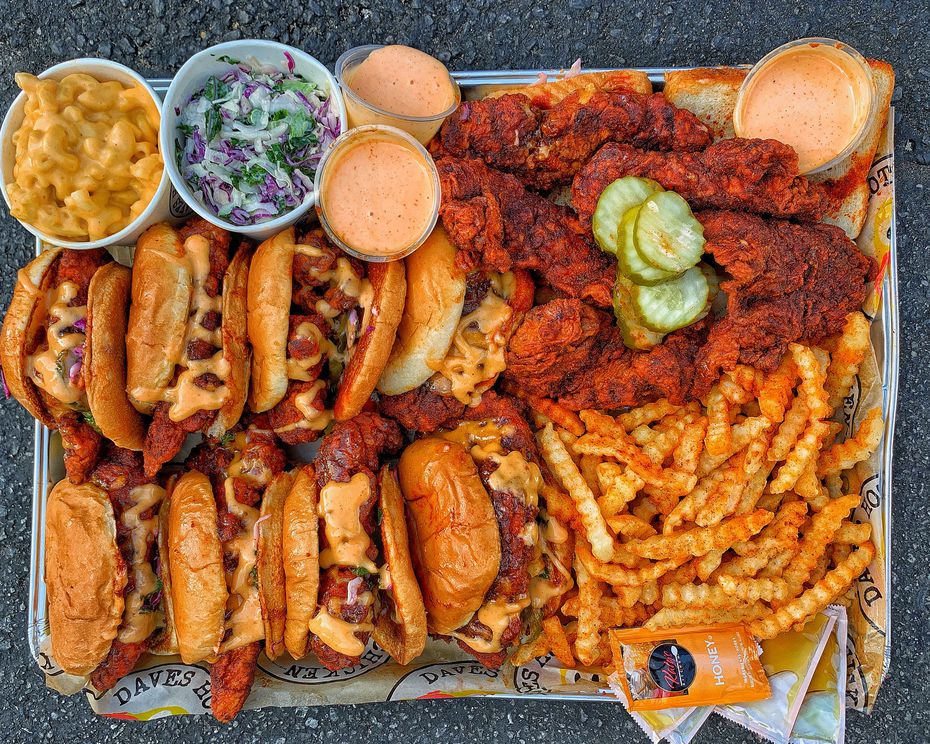 Dave’s Hot Chicken: In what we’re calling “the biggest cluckin’ expansion yet,” Los Angeles-based Dave’s Hot Chicken has plans to open 10 restaurants in Dallas. The first Dave’s in D-FW, run by local franchisees David Futrell and Ernest Crawford, is expected to open in May 2021 in Far North Dallas. The chain is named after co-founder and chef Dave Kopushyan, who saw a fiery rise for a business that started in a parking lot in 2017. Other leases in Dallas have not been signed yet, confirms a spokesman. Dave’s Hot Chicken will start by opening at 14750 Preston Road (between Spring Valley and Belt Line roads), Dallas. daveshotchicken.com.

Hot Chicks x 4: D-FW club owner Sam Sameni already has one Hot Chicks restaurant open, in Plano, but he has plans to open four more in other areas. Construction is underway on the Dallas restaurant, located on SMU Boulevard in place of a former Twisted Root Burger Co. After it opens, Sameni says restaurants in Las Colinas, Arlington and Willow Park come next. Details here. hotchickschicken.com.

Hattie B’s: One of Nashville’s trendiest hot chicken restaurants will open its first Dallas-area restaurant in Deep Ellum in summer 2021. More Hattie B’s are expected to open in Texas in the future, though no more leases have been signed yet in North Texas. Hattie B’s will be at 3000 Main St., Dallas. hattieb.com. 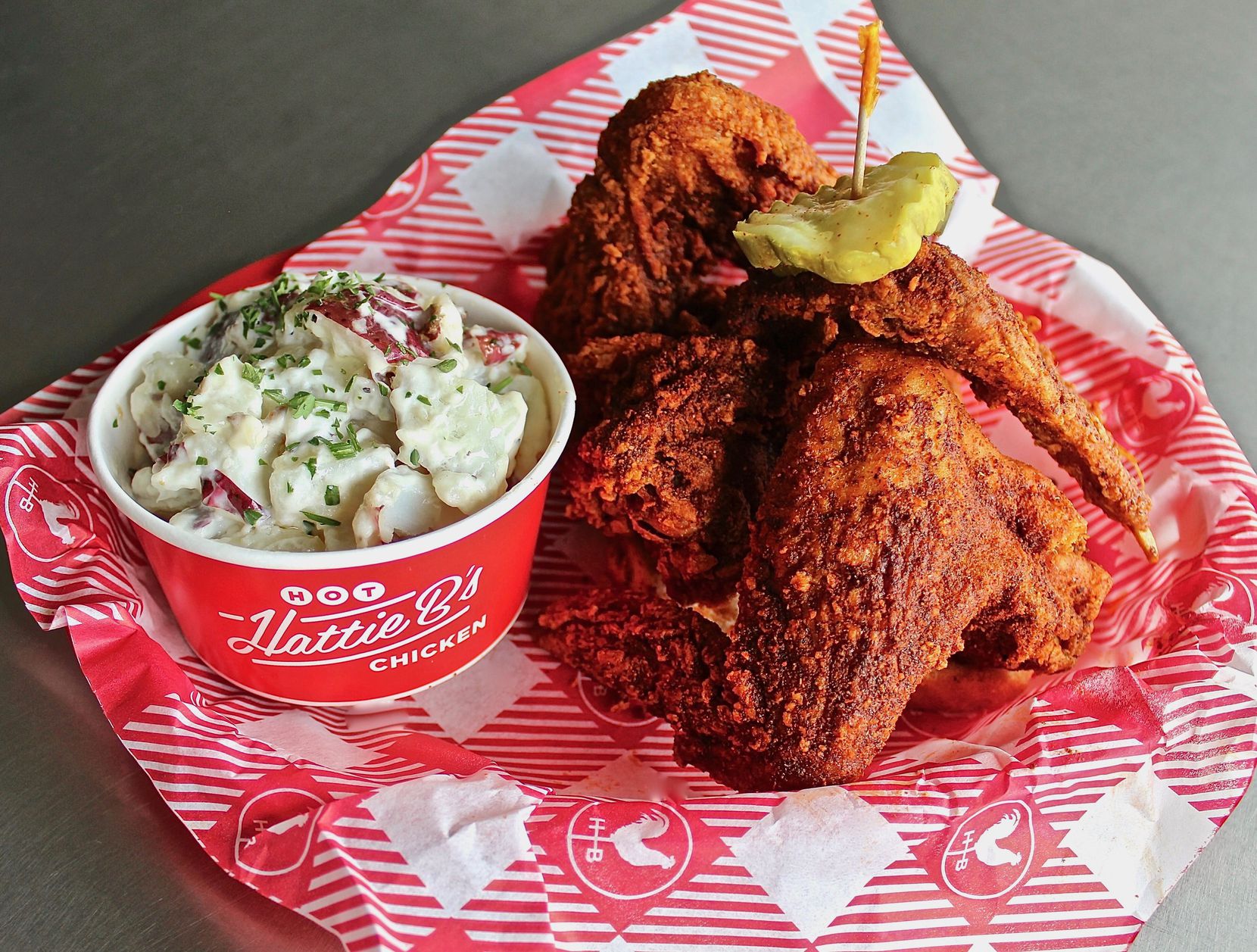 Mark our words: People will wait in line for Hattie B’s hot chicken when it opens in Dallas.(Joseph Woodley)

Helen’s Hot Chicken: It started as a food truck in Nashville named after owner Jeremy Mallard’s grandma. Today, it’s a growing restaurant brand named Helen’s Hot Chicken with just one shop in Texas, in a strip mall in Lewisville. They’ve been selling hot chicken in Lewisville since 2015, years before the trend heated up in D-FW. Helen’s sells chicken breasts, legs, wings, gizzards and tenders. The hot chicken and waffles served with syrup and butter seems worth a try. Helen’s Hot Chicken is at 413 E. Round Grove Road, Lewisville. Dining room is closed; pick-up and delivery only right now. helenshotchicken.com.

Sarah’s Hot Chicken: On Feb. 1, Sarah’s Hot Chicken started selling a short and sassy menu for delivery only. Cooks make the food at Half Shells in West Plano, but it’s a ghost kitchen, so customers will never step foot inside. Delivery options include a chicken sandwich, tenders, a shrimp po’ boy and a fried chicken salad. Those who order spicy chicken can cool it down with creamy coleslaw or mac and cheese. Delivery only, to addresses near its West Plano kitchen; check if you’re within range here. sarahshotchicken.com.

The Cookshack: Up the street from the Modern Art Museum of Fort Worth, the Cookshack is doing Nashville hot chicken and smoked ribs. We’re interested in their dessert: Aunt Peggy’s ice cream sandwich. The Cookshack is at 500 University Drive, Fort Worth. thecookshack.com.

Ricky’s Hot Chicken: Ricky’s in Richardson: That should be easy to remember. Ricky’s started as a hot-chicken obsession in the owner’s garage. It’s now a homegrown restaurant selling chicken at six spice levels. The XHOT has ghost peppers and scorpion peppers; the A-BOMB is one step hotter. Whew. Ricky’s Hot Chicken is at 100 S. Central Expressway, Richardson. rickyshotchicken.com. Hot Chicks: Is hot chicken sexy? Hot Chicks wants you to think so. (Despite the name, it isn’t a breastaurant; it’s just a restaurant with a punny name.) Here, Nashville hot chicken comes in the form of tenders, tacos and rice bowls. The top seller at the one restaurant currently in operation, in West Plano, is The Sandwich. It’s fried chicken with slaw and pickles served on a brioche bun. Hot Chicks is at 1885 Dallas Parkway, Plano. hotchickschicken.com.

Lucky’s Hot Chicken: The funky-cool exterior of Lucky’s Hot Chicken in East Dallas has an interesting history: It’s the former Brinks Coffee Shop from the 1960s, named for its operator Norman Brinker. (Brinker was a prolific restaurateur who had a hand in creating or growing some of the country’s biggest chains, Jack in the Box, Steak and Ale, Bennigan’s and Chili’s among them.) Lucky’s Hot Chicken serves a simple Nashville hot chicken menu in a throwback dining room. But it’s 2021, and delivery is available, too. Lucky’s Hot Chicken is at 4505 Gaston Ave., Dallas. luckyshotchicken.com. 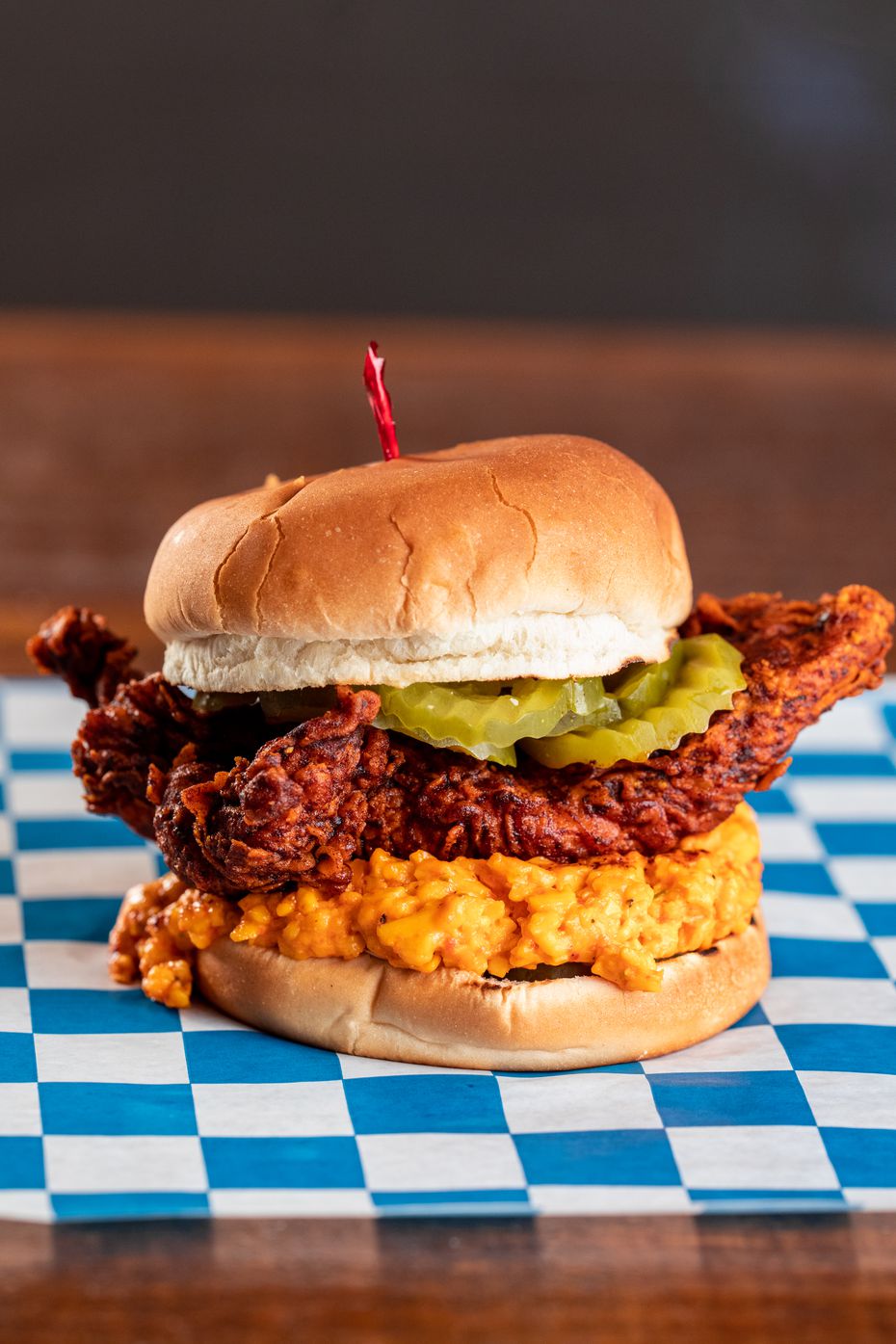 Palmer’s Hot Chicken: Deep South restaurateur Palmer Fortune moved to Dallas to open a hot chicken joint with his name on it. Of all the restaurants on this list, Palmer’s feels the most like a true Southern restaurant, with a more thoughtful menu that includes a variety of salads, plus sides like pimento cheese grits and flash-fried Brussels sprouts. It also has a comfortable covered patio with Astroturf and picnic tables. While many Nashville hot chicken restaurants focus on poultry, Palmer’s also sells shrimp and catfish. Drinks include mint juleps, palomas, frosé and ranch water, Dallas’ of-the-moment tequila cocktail. Palmer’s Hot Chicken is at 6465 E. Mockingbird Lane, Dallas. palmershotchicken.com.

It’s Just Wings: Not technically a Nashville hot chicken restaurant, we’re including It’s Just Wings on this list because it serves spicy chicken with an unexpected story: It’s Just Wings is the delivery-only brand from Brinker International, the Dallas-based company that owns Chili’s and Maggiano’s Little Italy. Customers can get their bird tossed in buffalo, mango habanero, honey chipotle or a creamy jalapeño-cilantro sauce called Santa Fe. There’s no Nashville hot chicken option, but for diners who aren’t as discerning, spicy options abound. Delivery only by DoorDash. itsjustwings.com.

More Nashville hot chicken, if you can believe it —

Beyond the dedicated hot chicken shops, some restaurants in Dallas-Fort Worth have added cayenne-laced chicken to their menus. Head here if you’re looking for Nashville hot chicken but your dining partners want something else: 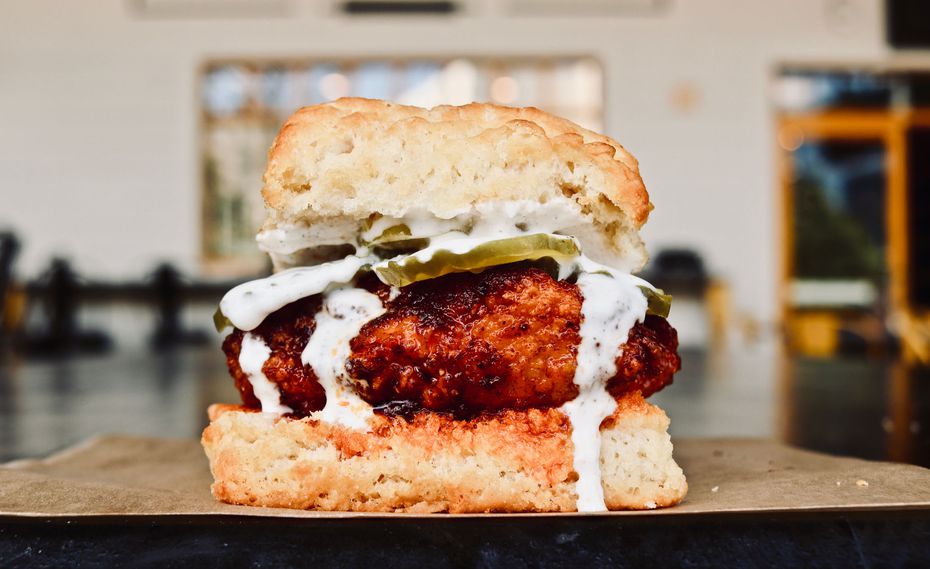 The Hot Hot Chicken at the Biscuit Bar is a Nashville-style hot chicken sandwich on a biscuit, with dill pickles and house-made ranch.(Courtesy of the Biscuit Bar)