During a stressful year, Dallas families look for joy amid major snowstorm

Brooke McCollum’s house had been out of power all morning. Her husband, an analyst, struggled to meet deadlines without internet access.

So it was easy for her to feel nervous in the cold house as the indoor temperature dropped into the 50s, not knowing when the lights would come on again. But then they saw the day from their children’s perspective. Time to relax, they decided.

“We have problems with adults, but they have their children’s perspective,” said McCollum. “If we don’t calm down, the only thing they’ll remember about the big snowstorm of 2021 is their parents being stressed.”

So she watched with a smile as her sons Mills and Henry, 8 and 10, rolled around in the shimmering white powder that transformed their neighborhood in Far North Dallas. The boys and the other neighborhood kids drove down a snow-covered driveway across the street with trays and refrigerators.

“Dare!” they shouted warning when one slowly approached the unsalted road.

It’s been a stressful year for families in Texas. Monday’s record breaking winter storm meant even more focused time at home than the pandemic had already caused, now with the added pressure of power outages and freezing temperatures.

Several families in Dallas told the Dallas Morning News that they could take it and try to make the most of it.

Eduardo Colon, 25, said he and his family hang around their fire pit almost every weekend. They often sing karaoke, tell scary stories, or play the lotería card game while they sit around the flames, he said.

When his family’s home in Old East Dallas lost power on Monday, Colon and his brother decided that sitting outside by the fire pit rather than inside as the temperature dropped might feel warmer. If you don’t think about the wind, he said, Monday could be a fine day.

“Being outside together just laughing a little and talking a little is better than just being covered up in your room,” he said after about 12 hours without power.

(From left) Brothers Alfredo Colon and Eduardo Colon chat over a fire outside their home in East Dallas on Monday, February 15, 2021. The family lost power at around 2 a.m. “It feels better out here than in there,” said Alfredo. (Juan Figueroa / The Dallas Morning News)(Juan Figueroa / employee photographer)

The last time the sky threw snow on Dallas, the power went out for a week at Shundrica Jones ‘grandparents’ home in South Oak Cliff. They didn’t have a gas stove or a way to cook food inside, so her grandfather dragged his grill out onto the patio and made meals in the cold.

Jones promised her grandparents that they would never have to worry about this again. She had a gas hob installed to prevent the same thing from happening in the next winter storm or power failure. The new device is one of the reasons her grandmother’s house became a family hangout during that blizzard as power outages made electric stoves unusable.

Seven people, including Jones’ grandmother, uncle, cousins ​​and their two young children, gathered in the house, which had electricity as of Monday afternoon. Family members traveled from Wilmer after losing their own electricity at 2 a.m. on Monday.

The group of seven spent most of the day indoors in shifts to make sure all electronics were attached to chargers in case the power went out again. If the power goes out, the family plans to recharge their phones from the car, but they don’t want to drive anywhere else in this weather.

Despite all the disturbances, Jquaylon Jr. and Ayannah Mitchem did not seem too affected by the extraordinary circumstances at the ages of 3 and 4, respectively. Like the McCollum boys, they were particularly focused on the snow outside, Jones said.

“They tried to make a snowman, but it didn’t make it,” she said. “They trampled over the bottom so we just made snowballs.” 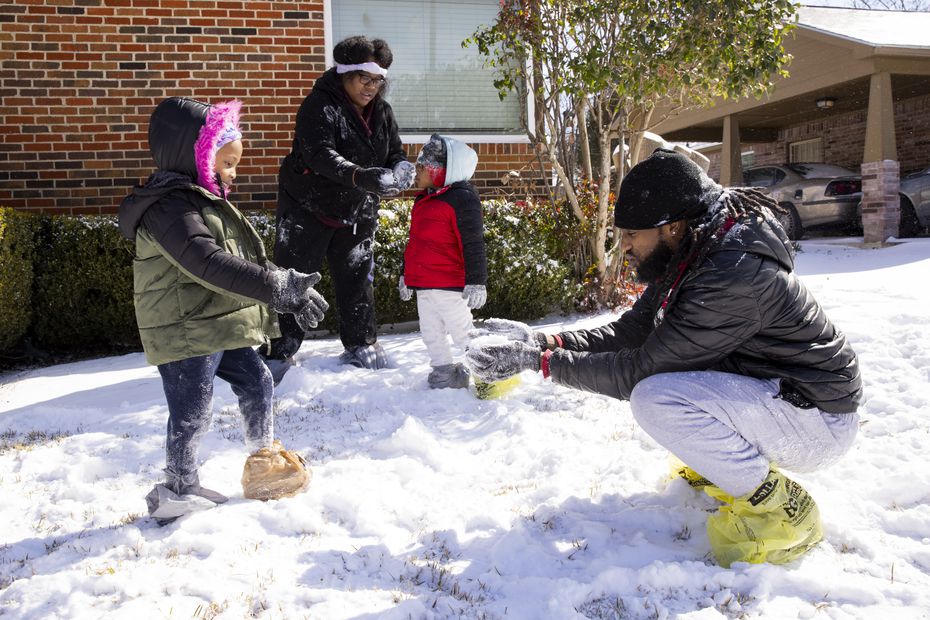 Jquaylon (right) and Jessica Mitchem (center) play with their children in front of Grandma’s home on South Oak Cliff in Dallas on Monday, February 15, 2021. The Mitchem family from Wilmer came to Grandma’s house after they lost power in their home. (Juan Figueroa / The Dallas Morning News)(Juan Figueroa / employee photographer)

Jones is a teacher and her school has already canceled classes for tomorrow. She worries about her students and what they are going through in their own four walls. She wonders if they are safe and warm – or if they have the ability to prepare food.

It feels like there’s not much else that can be thrown at teachers or families these days, but Jones has remained positive.

“I count all joy,” she said, “it just means that we are prepared for anything in the future.”