When the Dallas Holocaust and Human Rights Museum opened in 2019, nearly 75 years had passed since the fall of the Third Reich. Yet the number of anti-Semitic hate crimes reached record highs in the United States. Mark Holsinger, director at Omniplan in Dallas who oversaw the museum’s design, said the work on this gave the project a sense of urgency. “Every time there was an incident” – like the fatal shooting of 11 people in a Jewish synagogue in Pittsburgh, Pennsylvania – in 2018 – “it has reinvigorated the team,” he says. “Everyone felt the importance of getting this building right.”

As part of Dallas’s historic West End neighborhood, the building is subject to a city ordinance that dictates everything from the primary facade material (fired brick) to the arrangement of the windows (vertical and horizontal repetition). “We tried to find a balance,” says Holsinger. “This is an important area in Dallas and the customer wasn’t interested in interfering with this material. At the same time, this is a civil rights and human rights museum, and there was the idea that this building wanted to be a beacon. “

The height, mass and earth color of the three-story, 52,300 square meter U-shaped building reflects those of the nearby brick structures and reinterprets individual elements to create something contemporary and monumental. The most striking external feature of the building, however, is the faceted crown of copper plates that rises above extensive elevations of foreboding gray brick with punched windows. 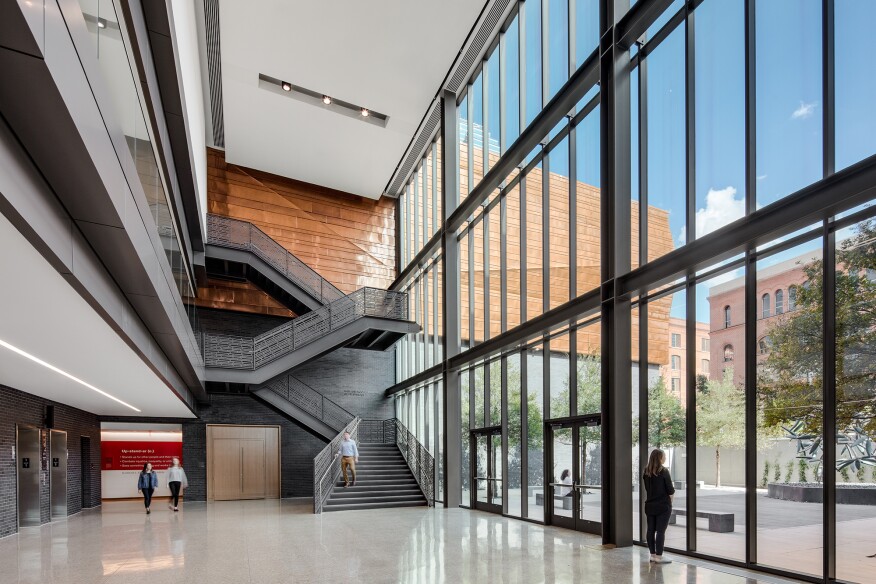 Jason O’Rear
The copper cladding continues in the museum in the inner courtyard and creates continuity between outside and inside.

From the beginning, copper was at the center of the building design, says Holsinger. “It started to symbolize this idea of ​​perseverance. Here is this material that can take almost anything. Yes, it changes and evolves, but it continues. “Visually separated by a recessed bay of light, the museum’s brick and copper planes never quite meet, which gives the impression that the copper crown is floating.

Upon entering the museum, visitors are directed to the top floor, where most of the exhibitions are located. According to Holsinger, Omniplan and exhibition designer Berenbaum Jacobs Associates wanted visitors to have a sense of ascent – not just physically, but when “your knowledge and awareness rise” too. Outside, the copper cladding of the building reflects this journey. A proud facet in the copper draws a path up from the northeast corner of the building; In order to exaggerate the feeling of movement created by this facet, the offset copper sheets of different sizes hang at an angle and follow the path of the facet.

To design and install the copper cladding, Omniplan worked with Baker Triangle, a drywall, acoustics and metal manufacturer with offices across Texas. “We originally detailed this copper tape because we thought they’d want to frame it on site,” says Steve Brookover, Omniplan’s technical director, AIA. But Baker Triangle “came up with the idea of ​​standardizing subframing.” Using Omniplan’s Revit model, Baker Triangle pre-fabricated the subframes at its Dallas facility, which saved 2,560 man hours on-site assembly and construction, according to Preston Pressley, vice president of business development at Baker Triangle. Prefabrication also reduced the likelihood of errors. “It would have been extremely complicated and time consuming to create the geometry Omniplan created from the boom and scissor lifts,” says Pressley.

Baker Triangle’s virtual design and construction team divided Omniplan’s facade design into 88 individual subframe panels, each approximately 30 feet high and 10 feet wide, and created a digital model for each. The team used cold-formed steel with 16 inches in the center and what Pressley called a pyramid frame to create the running copper siding facets. Since the facets appear in different places for each stud, no two panels are alike. “It was one of the most complex geometries we’ve worked with and one of the things we love – nasty, complex, scratchy heads, how-do-we-do-these projects,” he says. 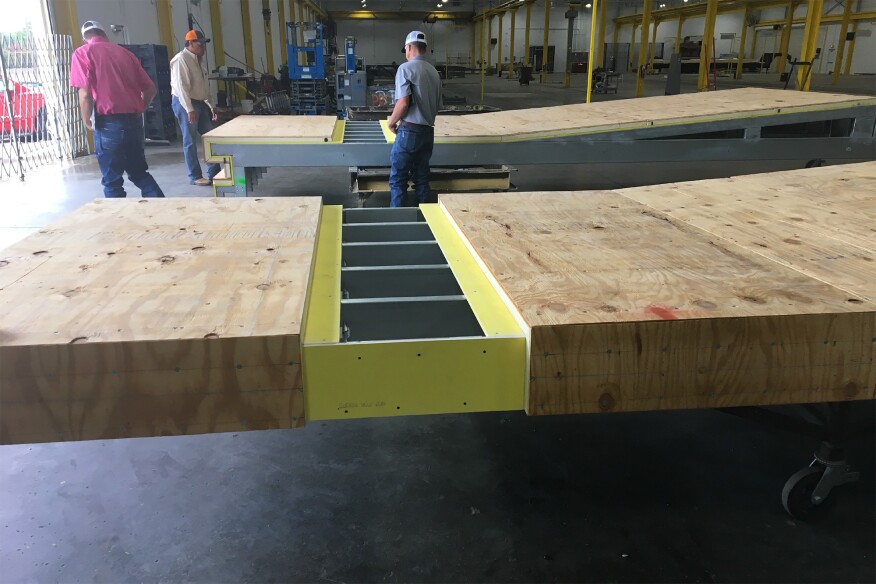 Courtesy of Omniplan
Each subframe panel was approximately 30 feet high and 10 feet wide. 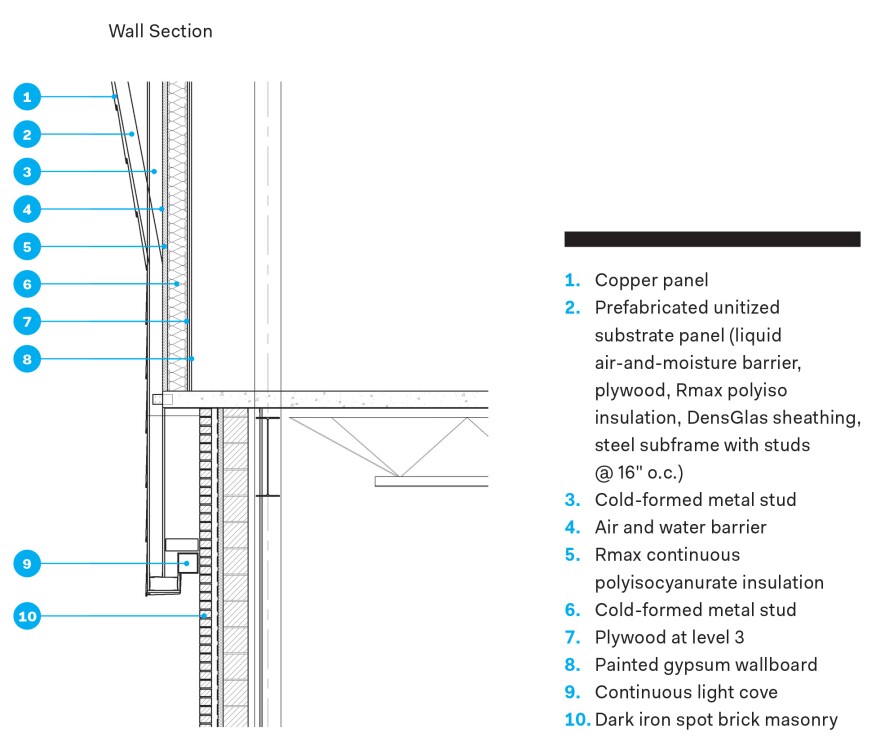 Over each steel subframe is a layer of fiberglass-mat gypsum sheathing, followed by a layer of polyisocyanurate insulation and then plywood that serves as the copper substrate. These prefabricated subframes were transported to the construction site, brought to the site and bolted to the museum’s steel frame. Once installed, Baker Triangle applied a liquid air and moisture barrier to the outboard plywood surface.

Unlike the pre-fabricated panels, the building’s 3,500 sheets of copper were made and folded on site, one at a time, using the dimensions created by Baker Triangle’s virtual engineering and construction team. To avoid scratches or dents, the crew followed strict protocols and put on white gloves while handling the Finnish-made copper. The 20-ounce copper was so malleable that it was “basically like a Coke can,” says Pressley. “You couldn’t stack [one piece] one on top of the other because it would scratch. If … you have people with fat or anything on your hands, that will be put on the copper and it won’t go away. “

The flat-locked copper sheet panels were then attached to the plywood using conventional staples. The foreman of the Baker Triangle, Carlos Cabello, supervised the installation. “This is one of those people who has a unique understanding of how things fit together,” says Pressley. What would presumably take 50 days to finish on site with no prefabricated panels took just 10 days.

According to Holsinger, the recessed light bay and the building corners were the most difficult aspects of the copper system. A number of models built on site and at the Baker Triangle facility helped resolve the difficulties.

The museum has already started to adapt to its surroundings. The copper cladding has weathered faster than the architects expected and has deepened from its original metallic brilliance to a dark, leathery brown. Due to the lack of salt and moisture in the air in northern Texas, it will never achieve that characteristic green patina.

The new structure represents a different development for the museum, which was founded in 1984 by a local group of Holocaust survivors. Previously, the facility was housed in an old warehouse a few blocks away and had a pretty low profile, says Holsinger. “With this building you can now have a louder voice in town. Their message and the lessons they must teach are rising in the city. “ 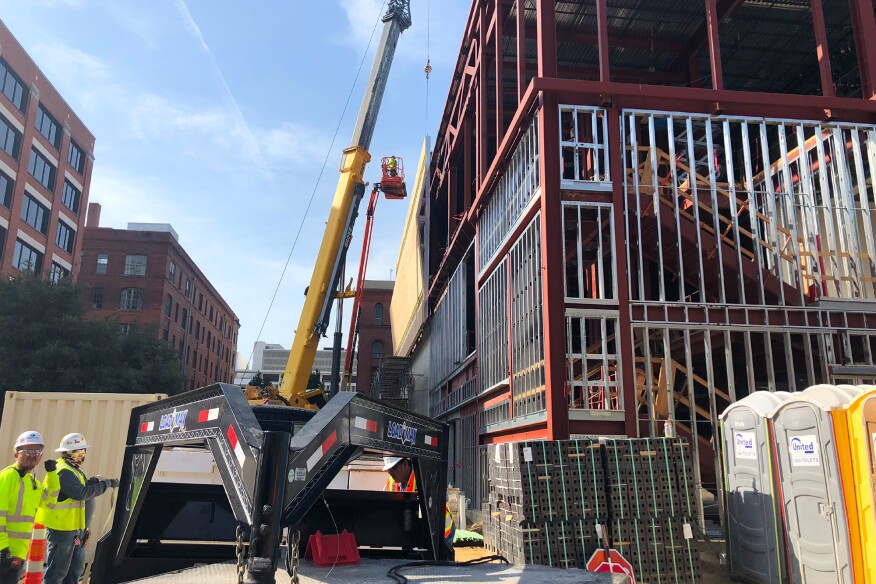 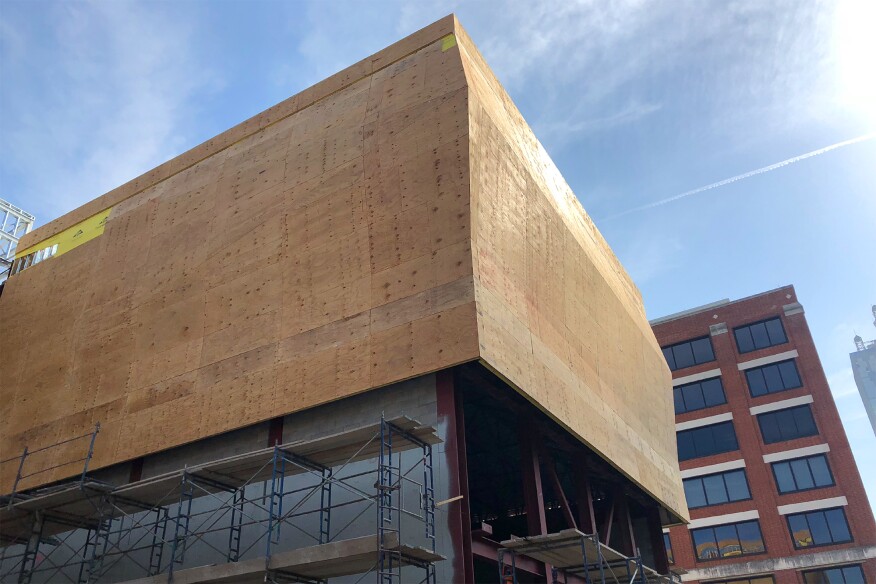 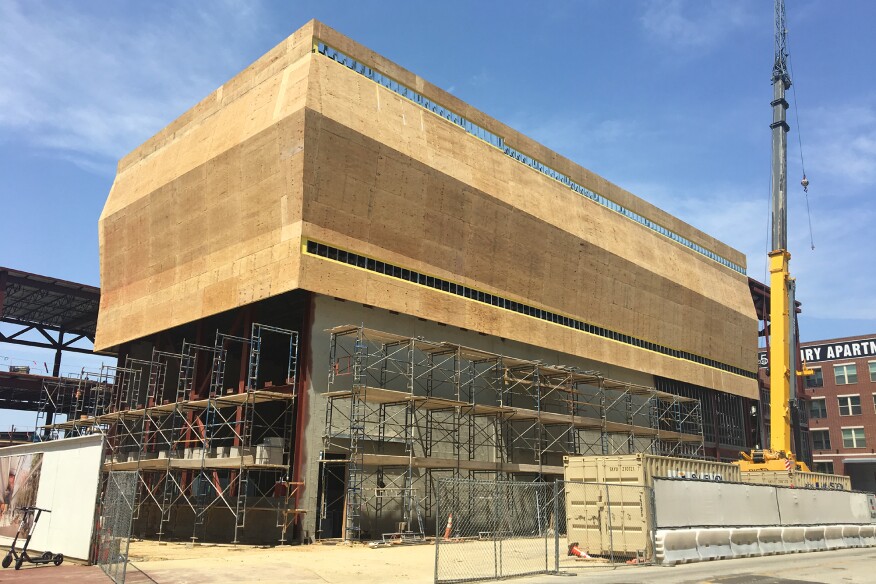 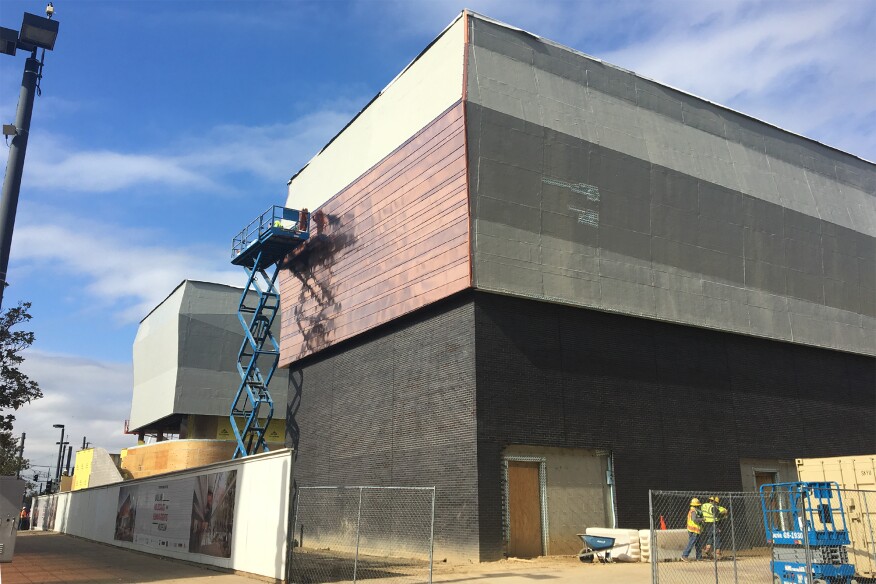 Courtesy of Omniplan
The workers attached the unitary subframe panels to the steel structure of the building, covered the plywood casing with a liquid air and water barrier, and then hung up 3,500 copper plate panels.

How To Find Girl Scout Cookies In Dallas, Hiram