A Dallas-based home builder is planning the first phase of an ambitious mixed-use development south of downtown Dallas.

The apartment project is located on a 15-acre development between the Good-Latimer Expressway and Cesar Chavez, about four blocks south of downtown. The location is next to the Cedars district.

Dallas-based Hoque Global has been working on plans for mixed-use development called SoGood for more than two years. The project includes the renovation of the former Pilgrim’s Pride chicken factory on Cesar Chavez, which closed in 2011.

SoGood should contain a combination of renovated buildings and new buildings. Commercial, retail and residential uses are planned in the project.

Corsair Ventures’ The Chole at SoGood apartments will be built in S. Cesar Chavez in 2010 and will begin later this year according to planning documents filed with the state.

The 384,000 square meter multi-family complex will cost more than 43 million US dollars and include a parking garage, club, pool and courtyards, according to the planning documents.

Corsair Ventures builds apartment and healthcare projects and has rental communities in Dallas, Rockwall, Houston, Fort Worth, and San Antonio.

SoGood is one of two main developments Hoque Global is planning on the south side of downtown Dallas.

Hoque and Omaha, Lanoha Real Estate, located in Neb., Are also planning the 20 acre mixed-use Newpark development on Canton Street near City Hall. The first phase of this project would include a 40-story tower. 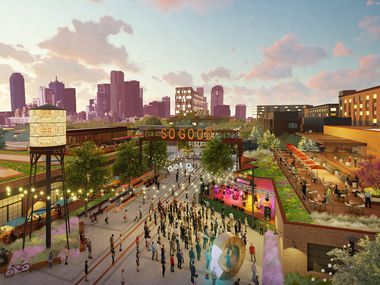 11 Beach Vacations a Flight Away From Dallas, Once It’s Safe to Travel