The parents of artist Carlos Ramirez, whose public art installation Altar to a Dream can be seen in downtown Dallas through February 14, were born in Mexico, moved to the Rio Grande Valley region as teenagers, and traveled the United States as young adults . after the harvests. As they drove through states like Texas, Oklahoma, and California in a Studebaker in 1951, they cared for a young family (Carlos and his two older sisters spent much of their childhood on the streets) and a dream of wealth and belonging while keeping an eye on them peeled for unfair bosses and anti-immigrant sentiment.

Sometimes the car was their home for the night. “They would never stop at hotels because they never knew whether people were hostile or friendly,” explains Ramirez. “They would go through word of mouth – other immigrants sharing places or places that were safe.”

For Altar to a Dream, Ramirez installed a Studebaker in the heart of downtown Dallas in 1951, similar to the one his parents once drove, adding colorful and meaningful decorative accents. Around the car are three small tables reminiscent of the homemade altars that are often seen in Mexican and Mexican-American homes. On the altars of Ramirez there are finds of religious icons and detritus of vintage brand names. For example, one table consists partially of an upside-down box of apricot advertisements from Sacramento, California. On the table are Zote soap, bread, coffee cans from Alpine and Taster’s Choice, a thermos and a decorated bottle of Clorox. On one side there is a metal lunch box with a picture of Jesus and the inscription “Illumina Mi Camino” (“Light my way”). On the other side is an item that Ramirez considers particularly significant: a hundred-year-old vintage chess board decorated with an image of Saint Christopher, the patron saint of travelers.

Carlos Ramirez with Altar to a Dream in Downtown Dallas.

“My mom told me what it was like to cross the United States in mid-century America like crossing a chessboard that you never knew when you would end up in a friendly or unfriendly place,” he explains .

Many of the details of Altar to a Dream were inspired by stories Ramirez heard of his mother picking grapes, onions, grapefruits and other plants and joining the United Farm Workers’ labor dispute with César Chávez in the 1960s. Ramirez’s father, who died two decades ago, can also be seen at the age of 19 in a hatched portrait on the door of the driver’s seat in which Ramirez remembers him. The back seat of the Studebaker is an even more personal realm for Ramirez; He has decorated the outside with children’s stickers and imaginative images of constellations in white color.

“I thought I would pepper it with little pictures as an ode to all the little children who have to work in the fields at a young age,” says Ramirez. “I remember sitting in the back seat, looking out the window and letting my imagination run wild.”

Altar to a Dream is part of PBS’s American Portrait Initiative, a multimedia storytelling project that includes TV documentaries and public art exhibitions across the country to mark the network’s 50th anniversary. Other public art exhibitions funded by PBS for this project are a mobile art exhibition in Tulsa, Oklahoma, by Rick Lowe, founder of Houston’s Project Row Houses, to keep residents engrossed in the story of the 1921 Tulsa massacre that killed at least 26 black Tulsans.

Ramirez said he spoke with American Portrait and partner organization RadicalMedia about multiple locations for Altar to a Dream, including locations in San Francisco and Los Angeles. He chose downtown Dallas because Texas is important to his family and because this is where John F. Kennedy was murdered. For Ramirez, both Kennedy and his assassination are closely linked to the struggle for civil rights. Altar to a Dream is an outdoor public art work of art, but the car is protected by a red-rimmed Plexiglas box that can evoke some thoughts of Kennedy’s last, unshielded motorcade. 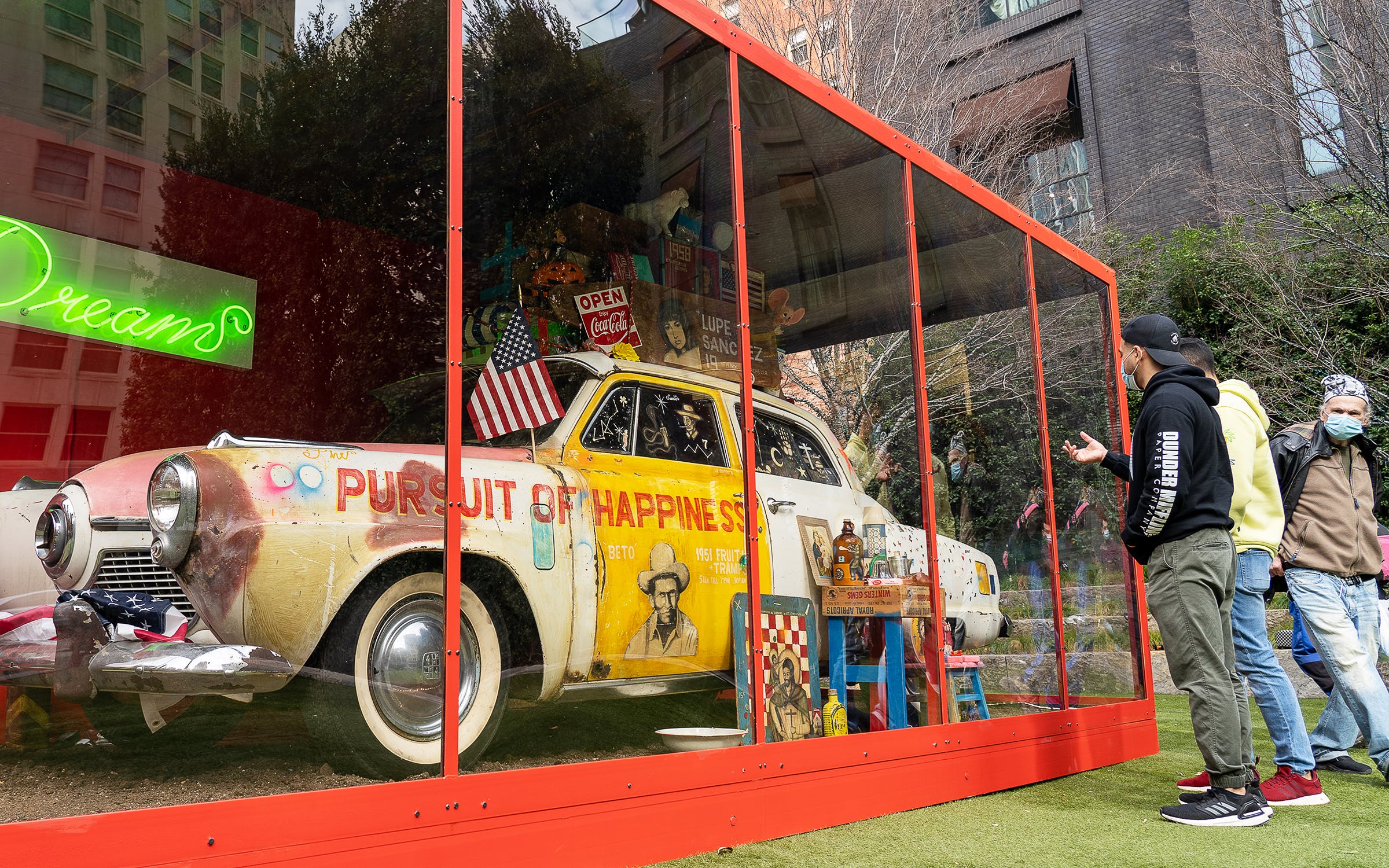 Altar to a Dream is in a small private park on Main Street across from boutique hotel The Joule in front of another, more permanent public art installation, sculptor Tony Tasset’s Eye, better known as the Dallasites selfie magnet “Giant Eye Ball”. “It’s an odd juxtaposition of artistic styles, but Ramirez says he likes the closeness. During the Black Lives Matter protests last summer, Eye was destroyed With the spray-painted phrase “NOW UC US” and local artist Lauren Woods (who writes her name in lower case), it was called for the graffiti to be left intact To remind future selfie-takers of the unfinished struggle against systemic oppression, the blue iridescent eye sculpture is called “symbolic of the surveillance state and white supremacy”. The graffiti has since been removed.

Dallas-based oil, hospitality and services giant Headington Companies, which owns The Joule and Eye, is the site sponsor for Altar to a Dream. Ramirez’s work can now be understood as part of the ongoing conversation on the website. “Where we are today as America, I think there is still a reckoning, or there is still a lot to heal,” says Ramirez. “I think that’s why it fits in well.”

To the extent that his work has a political message for our time, Ramirez refers to the sentence emblazoned in red in the front half of the Studebaker: “PURSUIT OF HAPPINESS”.

“I’ve been thinking about today’s social climate, how crazy it gets, how chaotic,” says Ramirez. “I thought this phrase was a perfect fit, just to illustrate what so many different people – regardless of where they’re from, what color they are, or whatever – needed to establish their legacy and how America was shaped by America, too . I thought: the pursuit of happiness applies to everyone. “

A Dallas-based founder looks to tackle the student loan crisis with his startup, College Cash – TechCrunch