5 swanky, new restaurants in downtown Dallas — all with patios

The five restaurants are so close together that you can walk to all five and travel less than a mile. They are in two main developments: the Thompson Dallas Hotel, which is in a renovated building called National; and the AT&T Discovery District, an extensive project with more than a dozen restaurants at the foot of AT&T headquarters.

That story begins with Hawthorn, the newest of the new restaurants. Read below for details on the other four.

Restorer Richard Ellman, who runs Dallas’s Oak, El Bolero, Pakpao Thai and Merchant House restaurants, has had plans for years to open a west coast steakhouse in downtown Dallas. A few years ago he signed the first restaurant contract in the AT&T Discovery District. His Hawthorn restaurant opened on January 15th.

The Port Room at Hawthorn in Dallas is a private space for cocktail parties.(JASON JANIK / Special Contributor)

Ellman describes Hawthorn as the opposite of an old-school steakhouse: “The decor feels clean and light, maybe one that people associate with the West Coast,” he says.

The menu includes eight steaks and a “fillet flight” – an order worth $ 85, which is meant for one person and consists of three different fillets.

Due to the identity of the restaurant with lighter dishes on the west coast, as Ellman describes it, there is also a separate sushi and sashimi menu that is more extensive than the steak menu. Hawthorn also has a raw bar that has oysters, caviar, clams, and squid. 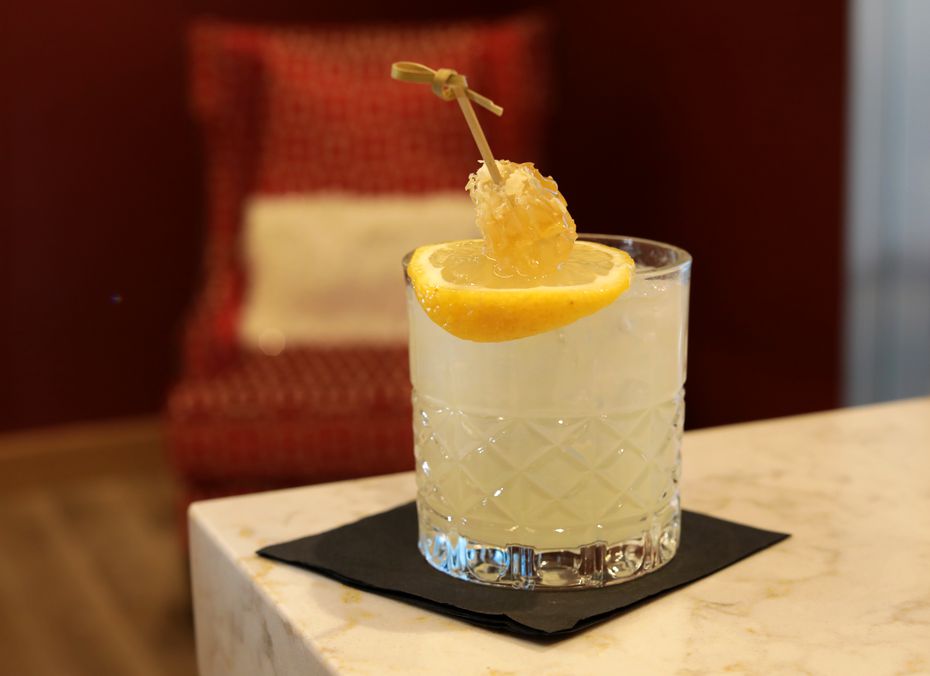 Located on the northeast corner of the AT&T Discovery District, the 6,000-square-foot restaurant is the first thing pedestrians see when walking to the estate from the east side of downtown Dallas. It was built into the lobby of AT & T’s Whitacre Tower, and Ellman and his builders spent years adding the kitchen and dining room in what “wasn’t originally designed as a restaurant.” The opening has been delayed several times.

The restaurant is full of art, including eight works by photographer Robert Mapplethorpe. The restaurant is also filled with scarlet patches inspired by the hawthorn tree that grows scarlet berries. The Port Room is a majestic back room that is available for private celebrations.

On the opening day of Hawthorn, Marcus Hagans, Assistant Director of Branding Experience for the AT&T Discovery District, said in a statement: “We’re excited to share culinary discoveries and some favorites – Wagyu Meatballs and Shrimp Gyoza – with the city.”

Hawthorn is located at 208 S. Akard St., Dallas. For now only dinner. Ellman would like to add breakfast and lunch later. Patio open. Take away and delivery possible.

Catbird and Nine in the National The sexiest restaurant on this list, Catbird, is bursting with style. It should “feel like a private club with no membership,” said Jonathan Geffrard, director of restaurants, bars and events at the hotel, in an interview in November. Located in the brand new Thompson Dallas Hotel in downtown Dallas, the restaurant has a large terrace and a neat selection of small plates such as pork belly skewers and miso salmon. When you go you want to get a cocktail.

One floor below Catbird is Nine at the National, the Thompson Hotel’s second restaurant. While Catbird is an evening spot, Nine is open for breakfast, brunch, and lunch. Dishes can be funky, like an appetizer of horchata braised carrots with peanuts and mole sauce, but most are more familiar: avocado toast, a double cheeseburger, a French dip, and the like.

Catbird and Nine at the National are located at Thompson Dallas (in a renovated building in downtown Dallas called National) at 205 N. Akard St., Dallas. Nine is on the ninth floor; Catbird is on the 10th. Overall, the restaurants offer breakfast, lunch and dinner. Patios open. Take away available. 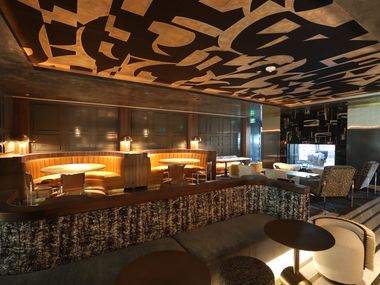 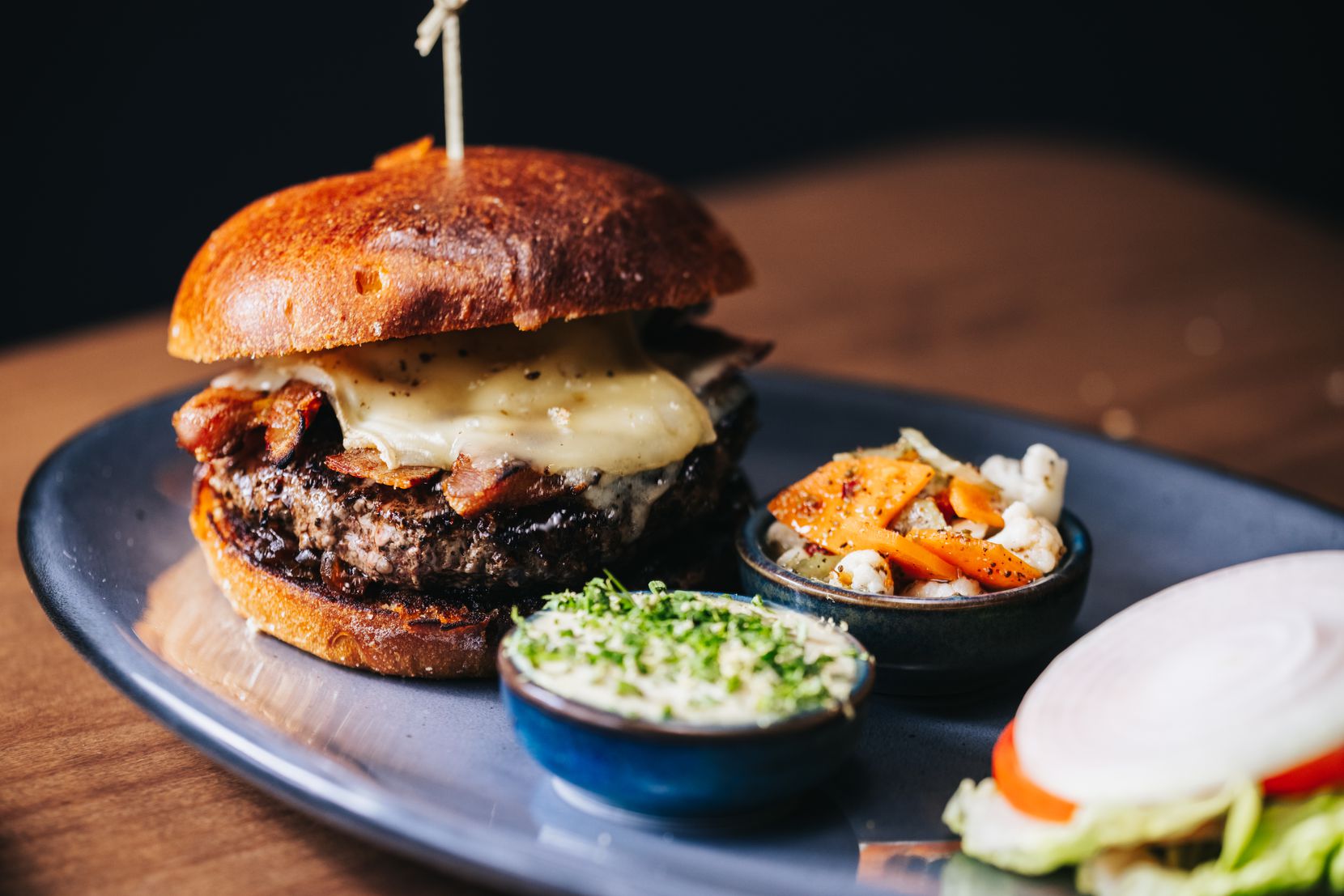 Ounce, a restaurant in the AT&T Discovery District in downtown Dallas, sells a burger created by Chef Brian Zenner.(Kathy Tran) 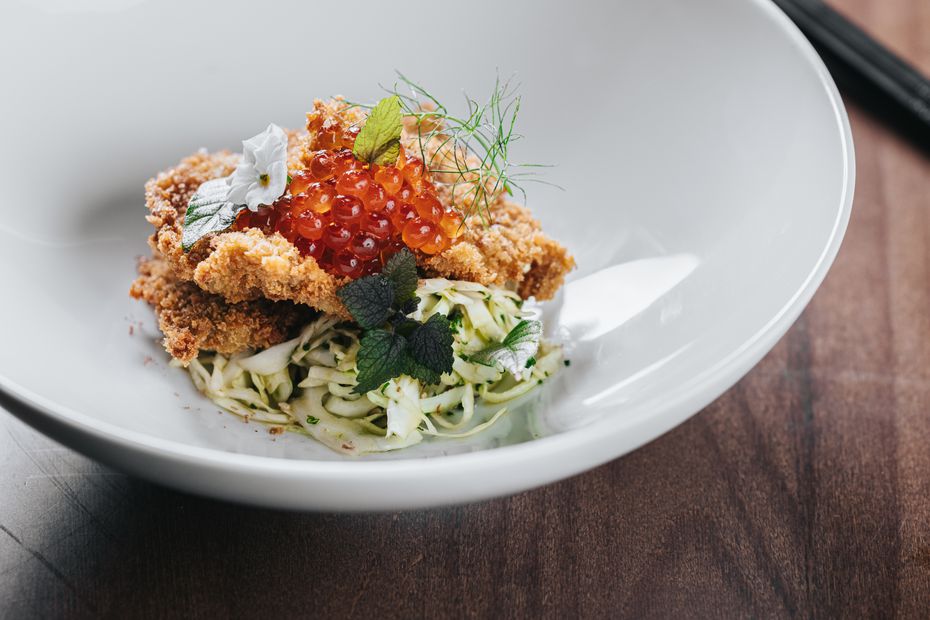 Back in the AT&T Discovery District, two restaurants have opened on the second floor of the Food Hall. Ounce and Ichi Ni San are described as two restaurants in one. Ounce is inspired by the “robust flavors of Texas combined with influences from the lively cuisine of Europe and the Mediterranean,” says chef Brian Zenner. He previously worked at the Rosewood Mansion on Turtle Creek in Dallas and is now the Food Hall’s head chef.

Director Alex Fletcher has created a fleet of cocktails for both restaurants. Customers can also browse the list of expensive cellar wines.

Ounce and Ichi Ni San are located at 211 S. Akard St., Dallas. Dinner only. Patio open. No take away. 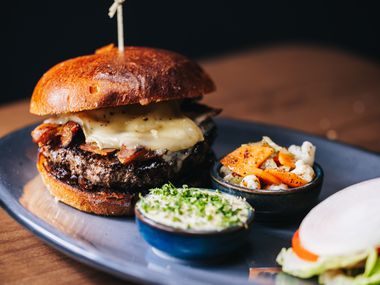